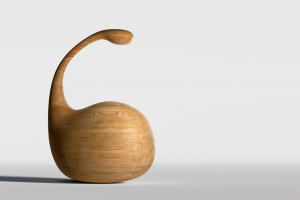 Nine sculptures by Jorge Palacios (b. Spain, 1979) explore the laws of physics and motion on microscopic and macroscopic levels. Integrated into the Museum’s permanent installation, Palacios’s works bring renewed attention to Noguchi’s frequent experiments with the physical sciences, as well as with turning art-viewing into a physical experience.

Jorge Palacios’s sculptures have been widely shown in public spaces, includ­ing in SoHo, New York City, where he exhibited Sketch in the Air (2015); in front of the Monastery of San Lorenzo de El Escorial, Madrid; in the “Torres de Colón,” in Madrid, and, as part of an exhibition of his urban sculptures in the streets of Toledo, at that city’s Floridablanca Sculpture Gardens, Sun Gate, Bisagra Gate, and Santa Cruz Art Museum. His work has also been exhibited in numerous museums, including the Santa Cruz Art Museum, Museum of Fine Arts of Guadalajara, and the Mirador Hall of the Thyssen-Bornemisza, in Madrid, and it may be found in public and private collections in Canada, Switzerland, Spain, and the United States. Palacios divides his time between his studio in New York City and his workshop in Spain. jorgepalacios.us