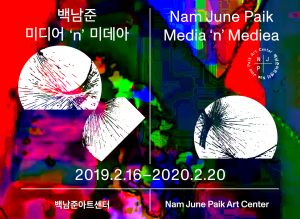 “Like McLuhan say, we are antenna for changing society. But not only antenna… My job is to see how establishment is working and to look for little holes where I can get my fingers in and tear away walls.” (Nam June Paik)

Nam June Paik Art Center presents its new exhibition titled Nam June Paik Media ‘n’ Mediea from February 16, 2019 to February 20, 2020. Inspired by Paik’s unique terminology, “video-videa-videology,” which reflected his idea of the ontology of video art, the exhibition explores the messages of “Nam June Paik Media” which not only acutely captured contemporary society, but envisaged a new future as artistic intervention in technology, and therefore, is still so contemporary and alive. And ultimately, it also asks whether what Paik pursued through his experiments with media, opening up new horizons in the art with video, will meet somewhere with the analysis of today’s media ecosystem.

The exhibition, featuring works selected from the Nam June Paik Art Center Collection, is centered on Paik’s Global Groove (1973), or “a kind of imaginary video-landscape that anticipates what is going to happen when all the countries in the world become interconnected via cable television” (Nam June Paik). In this video work aired on WNET-Channel 13, Paik foresaw, before the advent of satellite broadcasting system and internet-based communication, that video would serve as a medium to promote mutual understanding of different cultures. He praised a future in which this collage of various songs and dances from the world would spread through “video common market,” as if predicting YouTube. And as Irmelin Lebeer noted, this artistic vision went even further to dream “a transparent society after World War II, a society in solidarity on the basis of international mutual understanding, that is, without wars: the dream of the global village.” In the political-social situation in the late 20th century, marked by the Cold War tension after the two World Wars and Vietnam War, this artist presented a future where people would achieve “world peace” through media-based “communication.”

In Nam June Paik Media ‘n’ Mediea, visitors will encounter multi-step television experiments and artistic investigations which correspond to the “global man,” Paik’s great vision he described using electronic media. Entering the exhibition hall, they are first introduced to the artist’s media analysis in Nixon TV which understood the television as a two-way communication tool. The main exhibition hall, designed to represent Paik’s dream of “future video landscape,” is a large living room-like area, echoing our everyday environment. Seated on a large chair, visitors see Fontainebleau on the left, a media painting painted with cathode ray tubes instead of oil paints, on both sides of which there are Swiss Clock and TV Clock, visualizing incorporeal, nonlinear time. On the front, Global Groove is being shown on the multi-vision screen, situated between Charlie Chaplin and Bob Hope. In a room on the corner, TV Candle holds “light,” the first media which shed light on human civilization. In this seemingly modern everyday space surrounded by commercial AI-based applications and accessible screens, visitors can look back on how media, including light, films, electricity, radio, electric waves, and television, have changed the scenes of our life.

The last two works, Documenta 6 Satellite Telecast, Paik’s first satellite experiment video, and The Rehabilitation of Genghis-Khan, represent the epitome of his vision of “future landscape” which will be brought by international two-way communication via the electronic highway. In this age when technological media are changing the topography of our daily life more than ever before, we expect this exhibition will offer the opportunity to reflect on what messages media have for our present and future, through the thoughts of the “media visionary” Paik.