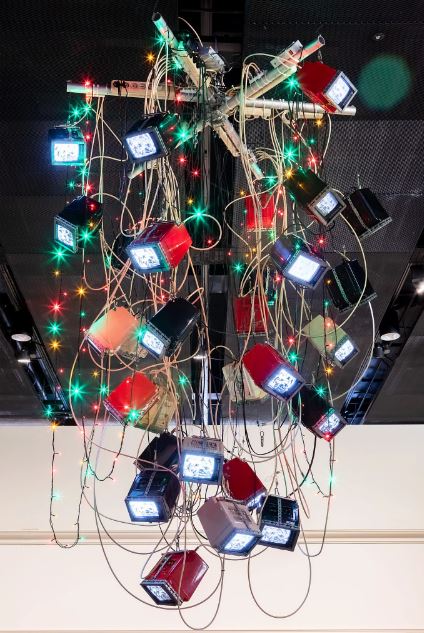 On the occasion of the 90th anniversary of Nam June Paik’s birth, this exhibition was born of the desire to revisit Paik’s glorious (but bygone) installations filled with videos and lights. While Paik’s video art is widely known, there are relatively few opportunities to encounter large-scale media installations. However, Paik took part in the 1993 Venice Biennale and installed a large-scale media work Sistine Chapel using 40 projectors, which caused a great sensation. In 1995, he presented Baroque Laser, in which he installed large-scale projections and lasers in a baroque church in Germany. All of these works are strongly bound to the specific time and space in which they were embodied. Sistine Chapel was made in the high ceiling and large space of the German Pavilion at the Venice Biennale in the heat of midsummer, while Baroque Laser was staged in a quiet and small church on the outskirts of Münster with all the windows closed.

One Candle, first presented at MMK Museum für Moderne Kunst Frankfurt am Main in 1998, is a real-time video installation that shows a variety of colors using five projectors by shooting a candle. This work was realized by transforming the structure of a CRT projector weighing as much as 80kg. Completely discontinued now, a CRT projector refers to a beam projector that amplifies image signals by three red, green, and blue CRTs and focuses them onto a screen through a projection lens. This old machine delivers black levels very well, but has low resolution. However, the lower resolution in fact shows Paik’s analog videos more abundantly by expressing fine details smoother.

In the exhibition Nam June Paik, Super Baroque we call the spatial and temporal experience that Paik created by projecting videos directly onto an architectural space as “analog immersion.” This might have provided a different kind of experience from today’s (perfect but flat) digital immersion generated by large-scale media facades or projection mapping realized with ultra-high resolution digital images. The analog immersion created by Paik becomes more powerful in a specific space. Sistine Chapel should be viewed in a dizzying noise reminiscent of a disco, and Baroque Laser under a large baroque dome following the guiding laser light. When an audience enters the work, a random combination of video projections and the architectural space is made to create a perfect space-time that only the person present at that very moment can experience. It has performative characteristics that cannot be reproduced or repeated, for it is an outcome of combining various unquantifiable information. It is similar to the ideal of Baroque Gesamtkunstwerk, which sought to reveal the ruling order symbolized by light by pursuing an ultimate interaction among all art media such as architecture, painting, sculpture, music, and dance.

For Paik, a laser is the fastest and most powerful medium for transmitting data and light, and it means endless possibilities of art and technology. Lasers, videos, televisions, CRTs, magnets, candles and the moon, these technologies are other names for Paik. He combined these technologies together to disrupt the flow of time so that we can live not only in the future, but also in the past, in many kinds of the past indeed. Certainly, we can also live in the present sometimes. Our jubilee ist unverhemmet!