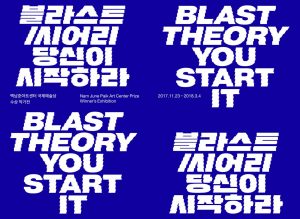 The Nam June Paik Art Center Prize was set up to discover and acknowledge the work of artists who venture beyond the known horizon, experimenting with materials and techniques to create innovative works which challenge the perceptions of contemporary art, as Nam June Paik did. Blast Theory has been internationally noted for their interactive works based on various media such as theater, radio, games, and the web. The Selection Committee considered Blast Theory as artists who investigate paths that no other artist has taken, and highly values their exploration of new boundaries, which matches the criteria of the Nam June Paik Art Center Prize. As the Chairperson of the 2016 Selection Committee, Soh Yeong Roh, Director of the Art Center Nabi, Seoul explains, “Blast Theory followed the trajectory of the development of the media, with their acute and in-depth psychological analyses.”

Formed and led by Matt Adams, Ju Row Farr and Nick Tandavanitj, Blast Theory’s work explores interactivity and the social and political aspects of technology. The group is renowned internationally for its use of interactive media, creating groundbreaking new forms of performance and interactive art that mixes audiences across the internet, live performance and digital broadcasting.

The solo exhibition You Start It by the British artists’ group Blast Theory, held for the first time in Korea, pursues the relationship which is not only begun by the audience but also maintains their active and activated state, not a mere interrelationship between works and the audience. For this purpose, Blast Theory uses various new media in a way that extends the concept of the audience’s participation and intervention. My Point Forward first presented in 2017 on commission by the Museum of London, meets Korean visitors at Nam June Paik Art Center in a new localized version. Featuring a series of short films shot in Korea, the interactive installation invites visitors to explore a future Korea and their place within it. Visitors’ soliloquies are recorded and become part of the work, building a portrait of the future that is personal, provocative and filled with hope. The imagination of the future finds a more concrete and extended form in 2097: We Made Ourselves Over. Taking you on a journey to the cusp of the next century, come into a world where consciousness is transferred from the dead to the living and cities are rebuilt overnight. In five short science fiction films, each accompanied by an interactive film for smartphones, the project explores the belief that everyone has the power to act and influence the future—and that perhaps anything is actually possible.

The audience’s participation plays a key role not only in these two works but also in the other works. The Thing I’ll be Doing For The Rest Of My Life a commission by the Aichi Triennale in Nagoya, Japan in 2013, is a project in which a 30 tonne trawler is dragged out of the water and pushed onto a park. This labor and performance to lift a scrapped vessel represents the will of participation and solidarity of a crowd of people who fought against the catastrophic, irrevocable disaster. It is a metaphor for the Japan tsunami of 2011 and the wounds, and many hidden efforts to rebuild the communities destroyed by them.

The work of Blast Theory, which includes media art, game, film, performance, new media, etc., moves the areas that are considered public places and constructs fields in which public conversations and plays are alive. In this huge playground, it is now your turn to start.