Nam June Paik Art Center: “The Future of Silence: When your tongue vanishes” 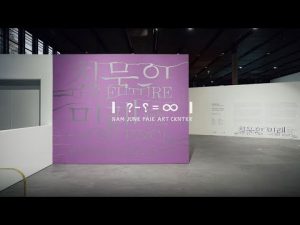 The Future of Silence: When your tongue vanishes examines language as spoken and written, as body and mind, as the corporeal and the conceptual, and as systems and cultures, based on the writer Kim Aeran’s novel of the same title. It also reveals the hierarchy and alienation created by the dominant language and the power of language directly connected to human rights as a tool for survival. The exhibition evokes these issues that permeate our everyday life and thereby sheds new light on the reality and diversity of language, invisible but present.

The eight artists focus on an endangered language with fewer users or, on the contrary, raise a question about the power of a certain dominant language and give new status to diverse languages. Furthermore, they emphasize that non-verbal communication also has specific forms, rhythms, and voices. In this way, they prove the existence of the community using such languages. Their attempts to look into the change of language and attitudes towards life, interlinked with technological advancements, show the prejudice and hatred hidden in our mind, the bright and dark sides of polarization prevalent in the whole civilized society. “Any media study should start with the languages” said Nam June Paik. From his experience of living in Korea, Japan, Germany and America, he could see how the power system of language controls human bodies and thoughts.

“Who am I and what will I be like?” Starting from the question of a tongue asking its own whereabouts, the exhibition ultimately seeks to recognize the existence that is different from oneself. Do our anxieties really come from other beings, other species and other languages? Would the anxieties be dispelled if we had only one tongue left in the future? We hope this exhibition will provide you with an opportunity to meet with different beings of the world in the landscape of vanishing languages.

We look forward to welcoming you back soon.