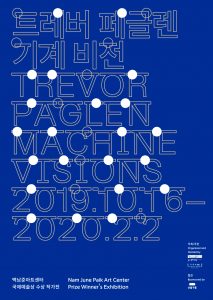 Commenting on Paglen’s selection, prize jury committee chairwoman Kim Hong-hee said, “Trevor Paglen is an artist who implicitly exposes the secret surveillance devices of military and intelligence bodies using multiple media including photography, video, sculpture and installation. By visualizing the results of his thorough research and investigations through abstract color and formal exploration, he creates his own unique style, combining politics and aesthetics.”

Machine Visions, Trevor Paglen’s first solo exhibition in Korea, is an intensive exploration of the unique artistic world that Paglen has created, based on a variety of media. The exhibition title refers to the phenomenon whereby images are no longer created for humans but by machines in order to operate machines. Today, artificial intelligence (AI) inputs image data of the objects, emotions and characters formerly perceived by people, combining it to give life to new forms. These forms can appear strange and ugly, as frightening as monsters or phantoms. Coming face to face with these products prompts us to ask ourselves whether technological development is really creating the kind of world we wanted, and to wonder what we are actually seeing.

Paglen photographs surveillance and communication systems, global internet hubs (Frankfurt, Amsterdam, London) and intelligence agency buildings created with the aim of ensuring military secrecy. Noting that power is enabled by infrastructure, Paglen directs his gaze directly at the power systems that exist secretly within it.
Paglen’s Nonfunctional Satellites are designed to evoke our imaginings about space. Taking the launch of a satellite and making it into a work of fine art, Paglen uses his work to pose questions that let us renew our interest in and perception of space, still a place of mystery. He describes these works as “impossible objects.” Paglen’s satellites serve no commercial or military purpose; rather, they are designed to become temporary artificial stars, creating pure happiness and a sense of mystery.

Calling his works “maps of the hidden landscapes and forbidden sites of the digital world,” Paglen uses high-performance optics and telephoto lenses, or dives 100 feet below the surface to explore the sea bed, photographing scenes of deep space and bottomless abysses. Capturing places of accumulated data, from hidden sites such as classified military installations and prisons to data from the digital world, drawing on AI, cable, and spy satellites, he re-compiles his own political map of unseen, unmapped places.

Inaugurated in 2009, Nam June Paik Art Center Prize is awarded by the governor of Gyeonggi Province and was created with the aim of discovering artists who, like Nam June Paik himself, open new artistic horizons through ongoing experimentation and innovation. Previously, the prize has been awarded to a series of artists and theorists who continue Paik’s artistic spirit, achieving fusion and consilience across various genres including music, performance and the visual arts by integrating technology and art, finding new means of communication and interacting with viewers. In its inaugural year, the prize was awarded jointly to four artists (Seung-taeck Lee, Eun-me Ahn, Ceal Floyer and Robert Adrian X). The following year, in 2010, it was given to philosopher and sociologist Bruno Latour. Subsequent winners include artists Doug Aitken in 2012, Haroon Mirza in 2014 and Blast Theory in 2016.

Born in the United States in 1974, Trevor Paglen studied art at the School of the Art Institute of Chicago, before gaining a PhD in geography from the the University of California at Berkeley. His works have been exhibited at institutions including the Van Abbemuseum in the Netherlands, Frankfurter Kunstverein in Germany, the The Metropolitan Museum of Art, San Francisco Museum of Modern Art and the Smithsonian Institution in the US, Tate Modern in the UK, Louisiana Museum of Modern Art in Denmark and the Israel Museum, and he has taken part in international events including Berlin Biennale (2016), Gwangju Biennale (2018) and Manifesta 11 (2016).
Paglen has published some five graphic art books on subjects such as geography, national secrecy and photography. He received a Pioneer Award from the Electronic Frontier Foundation in 2014, a Deutsche Börse Photography Foundation Prize in 2016 and a MacArthur Fellowship in 2017. In 2015, Citizenfour, on which Paglen worked as a cinematographer, won the Academy Award for Best Documentary Feature.