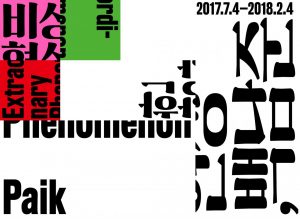 The exhibition is to look at the works of art by Nam June Paik who disrupted the artist-centered practices of music and visual art and reformulated a relationship with the audience, from a standpoint of “participation.” The notion of participation here is two-tiered: one is concerned with the audience’s part in the process of art-making, and with the workings of art at the audience’s end, and the other encompasses “participatory art” meaning social and political involvement by means of art. “Participation” in contemporary art is not confined to the audience’s interaction with artworks and construed as relating to social and political institutions.

Extraordinary Phenomenon, Nam June Paik aims to explore by the phases of his artistic development, the configuration of interrelations between the artist, the audience, the artwork and the art institution, set up throughout his oeuvre. At the first part of the exhibition you will encounter Paik’s manifesto for New Ontology of Music written in 1963:

Such graphic scores as Moving Theater, New Ontology of Music and Symphony for 20 Rooms that composer Paik produced in the early 1960s, postulated active audiences as integral to performing the scores. His ontology of music became a conceptual framework for understanding his later performances and exhibitions. Most works featured in his first solo show Exposition of Music – Electronic Television held in 1963 were in a state of flux, which could be transformed differently depending on the audience’s actions. This seminal event opened up a new chapter of exhibition histories in terms of its innovation in audience interactivity.

This pronouncement laid the groundwork for his later projects and performances overturning the frame of traditional concerts and exhibitions. It was the driving force behind what was shown at the 1963 exhibition too, including musical pieces like Klavier Intégral and Random Access, and also thirteen experimental televisions introduced there for the first time. His intervention in the television, in particular, by modifying and manipulating both TV sets and broadcast images, was geared not only to changing the relationship between artworks and audiences. It was no less than a joint intervention of the artist and the audience alike in the institutional workings of media systems, and a subsequently formulated proposition for new modes of communication could forge a different kind of social and political relations.

Paik’s idea of participation was much broader than the audience’s interaction with works of art; it was a challenge to the institutionalization of music and visual art, and on a more fundamental level, it was an experimental language of art per se. Paik often spelled out his experimentation on the intersection of art and technology like Paik-Abe Video Synthesizer, Robot K-456, and Good Morning Mr. Orwell, in musical terms. Wolfgang Fortner with whom Paik studied composition in his earlier days at Hochschule für Musik Freiburg, once remarked on Paik as “… so extraordinäre Erscheinung wie Paik… .” What Paik enacted marked the beginning of video art and also of a whole different idea of communication in art, carrying the audience into an unprecedented dimension of participation through fracturing canonicity of art. Extraordinary Phenomenon, Nam June Paik will look into the implications of Paik, the “extraordinary phenomenon” in art history.