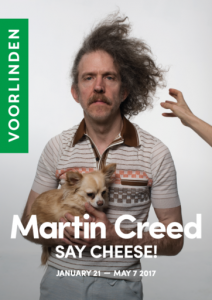 Martin Creed (1968)  won the Turner Prize in 2001 and has emerged as one of the leading artists of his generation. Museum Voorlinden shows forty works of him. The exhibition under the title ‘ Say cheese! ‘ invites visitors to explore the universe by Martin Creed.

Inspired by everyday life makes Creed simple but quirky works of art. The chaos that Creed in his own life experiences, is the drive to make art. Only in this way can he create order in his head. He looks at the world with critical eye, but also full of humor and self-mockery.