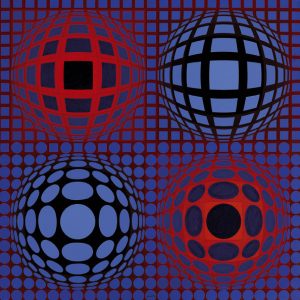 Art that demonstrates change catches the viewer’s eye and immediately enchants them. This exhibition demonstrates the different ways in which kinetic artworks play with our perceptions. On show are over 60 paintings, object boxes and sculptures from the Marli Hoppe-Ritter Collection, dating from the early 1950s to the present.

Kinetic Art had its first heyday around 1960, above all with the Italian Arte programmata exhibition and groups such as ZEROin Düsseldorf and GRAV in Paris. Spurred on by a sense of new departures in a changing, mobile life world, these currents challenged the traditional notions of art and introduced a host of innovations: space, time, dynamics and rhythm were the themes; electric motors, mechanical drives, light, and industrially produced materials such as aluminium, mirrors and ribbed glass were the means. The works from those years are outstanding examples of an art that combines the possibilities of technology with a non-representational aesthetic.

Over the decades, the interest in presenting and suggesting motion has never waned, so that today there are still numerous artists who realise works involving sophisticated movement effects. By employing new technologies such as computerised electronic systems or LEDs, a large number of kinetic works have been created in recent years that amaze and astonish the beholder. These are represented in the exhibition, along with artworks that require active viewing. Apart from pieces that truly move, the show also features an appreciable number of static works, such as from Op Art, which produce a sense of vibration in the viewer’s eye or create the impression of movement by means of geometrical shapes. This presentation focused on the Collection’s holdings is rounded off by two spectacular loans: an interactive electronic Sound Wall by Peter Vogel that transforms movements and shadows into an auditory experience, together with a large red swirl that artist Achim Zeman has made from hundreds of acrylic glass elements and which sets one whole wall in the museum wall in lively motion.