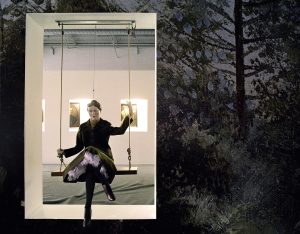 An architectural monument embodies the European spirit in the region: Morsbroich Palace, the home of Museum Morsbroich since its foundation in 1951, was built during the Rococo era, with later additions in the Neo-Rococo style. It was built by Provincial Commander Ignaz Felix Freiherr von Roll zu Bernau (1719–1795), who was substantially supported by his paternal friend Elector Clemens August of Bavaria (1700–1761), who surrounded himself with a splendid court and built a number of important palaces including Augustusburg and Falkenlust Palaces in Brühl. Both men shared a passion for hunting, and Morsbroich Palace was built as a Jagdschloss, a hunting retreat, in 1773/74. Against this rich cultural background, the exhibition pans out a rich panorama of works influenced by this unique European style, Rococo. The historical fabric of the Palace is regarded as a partner and as a playful backdrop for the artworks on show.

The Pliable Plan: the title of the show is programmatic. It is a reference to an exhibition of Portuguese artist Leonor Antunes at the CAPC Musée d’Art Contemporain de Bordeaux in 2015. At that show, Leonor Antunes installed an expansive web of copper wire and tubing (Anni #18, 2015) that embodies splendour and modesty, regularity and infinity in equal measure. In long waves, the web spans the vault of the central nave, falling towards the ground on one side from a height of around ten meters.

The title of Antunes’ show, in turn, harks back to an ephemeral piece by textile artist Anni Albers from 1957: The Pliable Plan; Textiles in Architecture. Albers had emigrated from Germany with her husband Josef, fleeing the Nazis, going on to teach at the legendary Black Mountain College. Together they passed on the traditions of the Bauhaus to a whole generation of American students. Weaving, the webs, the architecture and the free flow of thoughts: Leonor Antunes’ work is emblematic of the inner attachment of artists and their ideas down the centuries and, as such, an ideal device with which to represent the idea behind the exhibition.

The Rococo was the style of art that dominated the 18th century from the Régence (1715–1723) until the end of Louis XV’s reign (1774). Even so, its achievements are all but forgotten, often described with such disparaging epithets as saccharine, sweet, artificial, showy or playful. Its trail of success from France all over Europe, its coincidence and entwinement with the Enlightenment, and its continuing influence in terms of the history of ideas and art, even in contemporary art are often overlooked. Against this background, the exhibition The Pliable Plan. Rococo in Contemporary Art sets out to examine how this major European style lives on in contemporary art. The term “Plan” recalls the regularity of the baroque, from which the Rococo evolved and that it sundered in the figure of the rocaille—in plant and shell forms, bat wings and water fountains that embody the flexibility, the pliability of this style and its penetration into all spheres of art and culture.

In Morsbroich, the Rococo is understood as a European style that represents the best traditions of the continent—dialogue, attachment, transnational thinking, progress and enlightenment. It is no coincidence that special importance is attached to the diversity of nations and their ties. Within this context, it also makes sense to include various works by non-European artists that substantiate the impact of the world of imagination of the Rococo. Almost all artists have their own experience of migration within Europe and look back on an extensive history of international exhibiting.