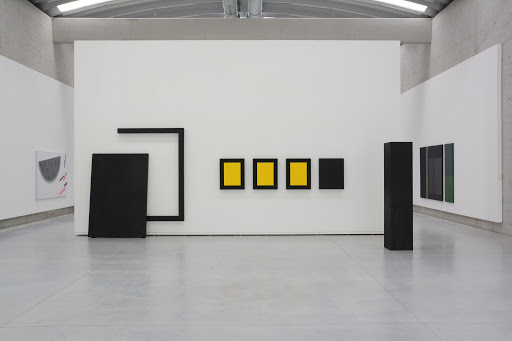 The main exhibition “o. T.,” curated by Dieter Bogner, shows geometries, systems and concepts from seven decades. On display is a selection of painterly, sculptural, kinetic, digital or acoustic works by Austrian artists from 1950 to 2020, which are based on a compositionally free, legally structured or conceptually developed handling of elementary forms, clear colours and simple objects or primary materials.

In addition to works from the Liaunig Collection, loans from artists, museums and private collections will be on display, providing a comprehensive insight into the multitude of artistic concepts in the field of elementary Austrian art, which has not been seen before either in the temporal dimension or in such media diversity.

The Liaunig Collection – and also the “o. T.” exhibition – displays a number of large sculptures and objects from all periods. The combination of two- and three-dimensional works of art, which has been possible throughout the decades, is of great importance for understanding the art scene from the 1950s to the present. The selective integration of analogue, digital and acoustic works, which often receive far too little attention, also contributes to this understanding.

Starting from a central introductory room, the division of the exhibition into three areas is a result of the architectural structure of the building. Blurring and overlapping between the three areas is consciously accepted, and indeed, is even part of the concept. There are undoubtedly many other ways of arranging the selected works in the exhibition spaces.

In the catalogue accompanying the exhibition, the works of art are consistently presented according to the year in which they were created. This results in a coincidental juxtaposition and succession of different generations of artists and artistic development strands, but also of techniques and media. The resulting combinations offer many surprises and challenge the viewer to a precise analytical observation and interpretation of the individual works.

Dieter Bogner states in the catalogue: “The use of the abbreviation o. T. as a title for an exhibition requires a justification. It is a common term for works of modern and contemporary art, which is used when artists do not wish to give a work a title. The viewer’s attention should be directed to the work in question. This invitation to view the work, which is not influenced by any indication of orientation, is one of the reasons for using the title o. T.. The second reason for this decision lies in the difficulty of making a justifiable decision for an “umbrella brand” valid for the entirety of the works shown in the exhibition from the multitude of terms that have been in use for phenomena of elementary design for almost a hundred years – and some of which are still in use today.”