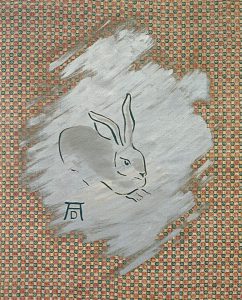 Sigmar Polke (1941 – 2010) counts among Germany’s great pictorial innovators and most important painters. His works live off organised coincidence and harbour mysterious surprises. They are marked by a playful way with words and images that transcends any attempts at categorical stringency.

The exhibition in Museum Frieder Burda concentrates on two essential characteristics of Polke’s works. Under the aspect of alchemy, it focusses on the random or even chaotic appearances of his paintings, which are created by the use of unusual materials, which in turn leads to idiosyncratic colour patterns. Alchemy is juxtaposed with the aspect of arabesque – ornamental line patterns, which Polke took, for example, from the wood-cuts of Dürer and Altdorfer. However, he also painted his own palm lines or generated random lines.

Sigmar Polke pursued these apparently random, yet deliberately chosen patterns in other materials and media, for in-stance filling slits in asphalt with molten gold, documenting the squiggly growth of vines or photographing radioactive uranium rock. He filmed chemical colour experiments and collected fluorescent uranium glass. He also took an interest in distorting mirrors. In addition to high-calibre paintings and works on paper, the exhibition presents the “gold pieces” Polke made in the US in 1991, as well as a large number of photographs, two films, photos of uranium rock, along with Polke’s own collection of uranium glass objects.