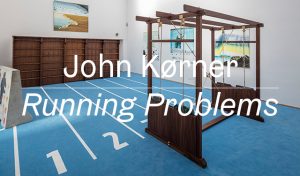 John Kørner (born 1967, Aarhus, Denmark, lives and works in Copenhagen) who approaches both painting and installation in an unexpected way, is one of the most prominent contemporary artists in Denmark. Running Problems is the first museum exhibition of the artist in Belgium and creates an integrated environment of movement, sport, propaganda and art. Kørner assesses the role of sport in our society as a social phenomenon that impacts both the economy as well as the body and gender politics. For Kørner, sport with its visual language, colour and codes is both influential and aesthetic. He appropriates the language of sport and thus creates paintings or installations that entertain and challenge the viewer at the same time, such as an anti-terrorist roadblock transformed into an obstacle course or a drinking bar converted into a climbing frame.

Ives Maes (born 1976, Belgium) is a multidisciplinary artist who mainly works with photography and installations. Since November 2013 he has been working on a new series about his heimat, a photographic document about the village of Zonhoven – Sunville. These recordings ended symbolically in March 2015 after a partial solar eclipse in the area. Since then he has been editing these recordings in the form of photo sculptures and photographic installations. The first works from this series were shown in 2015 while in residency at the Woning Van Wassenhove where the artist was the very first resident. The exhibition takes place within the scope of defending his doctorate at the University of Ghent and KASK School of Arts.