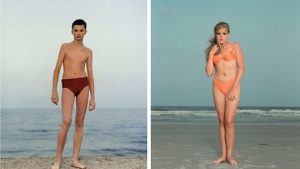 Rineke Dijkstra (Sittard 1959) acquired international fame in the 1990s with her Beach portraits. With this moving series of pictures established her reputation as a maker of portraits that the identity, vulnerability and dignity of the people portrayed in her own inimitable way. Last year she was awarded the prestigious Hasselblad Award.

Dijkstra prefers working in series through which differences and similarities between the people and their cultural background are underlined with subtility. She makes her portraits with a view camera on tripod, a time-consuming process that determines its method. It creates the conditions and plays with the light that seems of course but just different. Also the choice of the characters is done carefully, but at the same time, there is room for a certain casualty. The razor-sharp detailed pictures give the spectator the idea almost face to face with the people portrayed. At the same time they lose through the serial character also something of their individuality. As a viewer do you identify especially with feelings that they show, such as embarrassment or discomfort.

The theme is transformation in different series. Young people on the border of adulthood looking for their identity. The nice French boy who in a few years turns into a tough soldier. Is he this or he plays a role? This kind of question intrigues Dijkstra. How truthful a picture may seem, the sitter remains unfathomable. Who is hiding behind a mask and who reveals his true face? This struggle is subtly portrayed in the video of Marianna, a ten-year-old Russian ballerina who a dance practice. With every new attempt smiles them as hair is instilled. Gradually enter fatigue and rebellion.

Her exhibition in The Pont was organized in cooperation with the Louisiana Museum in Denmark.