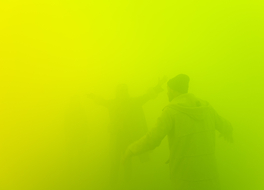 Light, colour and space are the fundamental materials used by Ann Veronica Janssens (Folkestone, 1956). With these intangible phenomena, she creates ‘sculptures’ that make the invisible visible. Architecture is, by nature, static; whereas light and colour remain changeable. That is what Janssens investigates while, throughout the process, she experiments and sets people and things in motion. Her work, based on sensory perception, demands the active involvement of the viewer.

With her interventions, Ann Veronica Janssens turns the museum’s ‘white cube’ into an indefinable space filled with colourful mist. Despite the presence of light, we need to grope to find our way. The disorientation makes us wonder: just how big is this place? And – am I alone? Gradually the limits of the space become discernible, and people begin to loom forth in it. The artist challenges us and puts our senses to the test. What are we actually seeing and experiencing here?

In an interview from 2016, Janssens tells about growing up in Kinshasa, spending her days there tinkering and observing a great deal. Her father was an architect, and her mother worked in an art gallery. In the local museum, she became acquainted with African art. Architecture, art and the idea of experimenting and observing were part of her early surroundings. Simple discoveries, such as reflections of light that appear on a smoothly polished train rail or while mixing a vinaigrette, frequently prompt a new series of works. The initial attempts begin on a small scale, in her studio, but then she seeks the support of technical specialists in order to achieve the effect that she has in mind. But as Janssens emphasizes in her interview, chance also plays a role in the realization of her work.

We can, in any case, conclude that Ann Veronica Janssens evokes wonder with works that are unusual and ordinary. It’s a bit like the experience of an aeroplane traveller taking off on a dreary grey day and then passing through a dense layer of clouds. In the luminous white surroundings where patches of fog rush by, points of orientation such as above/below and far/close disappear. Once the plane has risen above the clouds, sunshine abounds. There the bright blue sky offers endless vistas, while an occasional cloud floats by. A Janssens exhibition feels like a rite of passage: ordinary phenomena suddenly assume magical power. 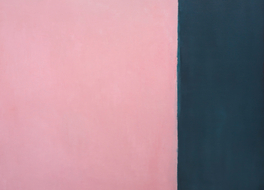 Michaël de Kok (Hilvarenbeek, 1958) paints landscapes. Yet this is not the first thing that comes to mind on seeing his exhibition of recent works in De Pont’s podium space. Most of the works consist of two juxtaposed, apparently monochrome surfaces. Any trace of figuration is gone. Even the horizon – the line that separates land or water from the sky – has vanished from his landscapes. Or has he rotated the canvas?

Ever since landscape was invented as an independent genre in painting, it has been an endless source of inspiration and delight. During the seventeenth century, the Dutch masters were the first to record their surroundings in paintings full of meticulously observed details. But no matter how realistic they appeared to be, these images were rarely topographically precise renderings of specific places. The landscapes of Michaël de Kok are based on recollected images – observations or experiences transposed into paint. Anyone who asks him where he painted a work will always receive the laconic response: ‘in my studio.’

But his sources of inspiration are no big secret. He enjoys walking with his dog in the vicinity of Tilburg, where he lives, but is also drawn to the rugged, desolate mountain landscapes of the Spanish Pyrenees. And the changing light of the seasons influences his work: subdued light in the autumn, for instance, and sharp contrasts of colour in winter.

The observation and experience of a tangible landscape is what prompts De Kok to paint. The American artist Agnes Martin (1912-2004), known for her serene grid paintings in delicate colours, once stated in a lecture: ‘Experiences recalled are generally more satisfying and enlightening than the original experience. It is, in fact, the only way to know one’s whole response.’ In her view, the memory has inestimable value.

In his quest for the essence of a landscape experience, all narrative elements – the lone wanderer, a dilapidated shed, a swimming pool no longer in use – gradually disappeared from De Kok’s paintings. Ultimately an abstract play of light and colour takes shape; an interaction of absorbent and radiant surfaces of color, free of the coercive presence of a horizon. In an interview with the Belgian art critic Eric Rinckhout, De Kok summed up his approach as follows: ‘During the process of painting, there comes a moment when the painted image displaces the recollected image, and the realistic quality of memory gives way to the suggestion of that which is painted.’