Museum Calouste Gulbenkian: ‘The Emperor’s Flowers: From the Bulb to the Carpet’ 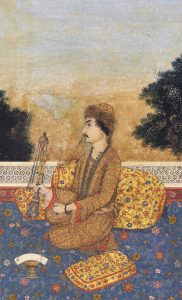 Throughout the 16th century, Europe’s extensive relations with the world reshaped its knowledge of nature. New products and previously unknown plant and animal species were brought to Europe from the West and East Indies. Seeds and bulbs of exotic flowers were brought from the Levant. Deeply admired for their beauty, these flowers attracted a growing amount of attention from botanists, who dedicated themselves to the study of both exotic and local flora. Cherished by curious laymen, scholars and aristocrats, flowers were given a privileged position in newly created gardens. Only the gardens of a fortunate few, however, were able to show off specimens of the highly sought-after exotic plants. Described by botanists and scholars, flowers were depicted in richly illustrated botanical albums. Such printed volumes were widely circulated in Europe and across the vast expanses of Empire. Taken on diplomatic, religious and trade missions by European travellers and emissaries, by the late 16th century the albums had arrived at the Mughal court, where they were greatly admired. Under imperial patronage, local artists copied the drawing techniques and methods of depicting plants from these European compendiums.

This exhibition offers an analysis of the decorative motifs found on two rugs produced in Mughal India during the reign of Shah Jahan (1628–1658) and now belonging to the Islamic Art Collection of the Museu Calouste Gulbenkian – Founder’s Collection. The naturalist style and typology of the floral designs of these pieces is indicative of the dialogue established between East and West over the 17th century, while also reflecting the global movement of people, books, images and botanical specimens.