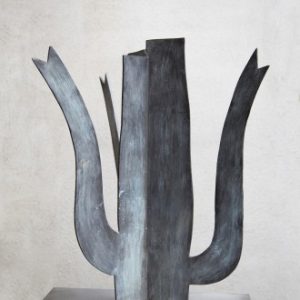 During his entire working life Klaas Gubbels has remained loyal to just a few objects from still life: the table, chair and coffee pot (or kettle, as he calls it). These are simply everyday objects, nothing special at all. But in Gubbels’ oeuvre they are special, in the way in which they are depicted. For some time, Gubbels has worked on still lifes that were intentionally everyday, almost boring. In repeatedly painting simple shapes the manner in which they were painted became very important. That’s when he really is painting. Which colour should he use, what happenstance comes into being on the canvas? If this does occur, he hopes to be able to recognize it and make use of it. When at work he often surprises himself, and certainly when he is assembling his objects: there is suddenly something that inspires him.

The artist has used the coffee pot so often in his work that it has almost become a character or personage. This character is portrayed very clearly in the pictures that Klaas Gubbels makes of the coffee pot or kettle. It is sometimes spiky, unwieldy, unsteady, robust, arrogant or romantic. Apart from paintings of his regular subjects, throughout the years Gubbels has also made great use of objets trouvésas his subjects. For most of his life he has been able to rely on the flea market as a source of objects that provide him with inspiration. These are depicted in paintings, often depicted on a table. This table is just as important to the picture as its other components.

The treasures of art history have not left Gubbels unmoved. In both his paintings and his sculptures can be found ‘odes’ to well-known national and international artists, such as Paul Cézanne, Jan Schoonhoven, Günther Uecker, Jan Roeland, K. Schippers and Cor Vaandrager. He creates odes not only to artists, but also to his friends, such as Cherry Duyns and, last but certainly not least, to his wife Heleen, often in the form of a heart-shaped coffee pot.

This year Klaas Gubbels has reached the age of 85, and is celebrating this milestone in museum Beelden aan Zee with a retrospective of the works he has created over a period of more than half a century. To be seen in the exhibition are works in glass, cardboard, plaster, bronze, wood, and steel, plus sculptures of assembled objets trouvés, from those that can be held in the hand to monumental sculptures displayed on the patio.