The Hague, the Netherlandsuntil 23 September 2018 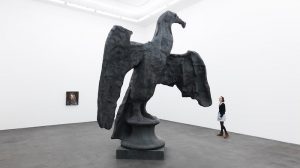 Under the title Naked Roots museum Beelden aan Zee will display a selection of fifty sculptures in clay and bronze, many of which are monumental, by the Belgian artist Johan Creten. With both earlier and more recent work, this exhibition provides the visitor with the opportunity to gain a broad overview of his rich oeuvre. The symbolic title refers not only specifically to the basis of Creten’s sculptures, but also to more general themes such as origins, the place of the individual in history, and human relationships.

The New York Times correctly described Johan Creten as an artist who was able to take ceramics out of the traditional conventions and help it gain a leading position in the field of contemporary art. He has used clay and ceramics since the 1980s in a highly original, personal way, and this has resulted in sculptural works with a deep conceptual basis. Clay is not longer le parent pauvre (the poor relation), but a material that has a serious artistic aura and limitless new possibilities.

This resulted in a vast ceramic oeuvre that he has exhibited worldwide in countless major museums such as the Bass Museum in Miami, the Crac in Sète and the Louvre in Paris.

Johan Creten (Sint-Truiden, 1963) initially studied painting at the Academie voor Schone Kunsten in Ghent, then studied sculpture at the École Supérieure des Beaux-Arts in Paris and was resident at the Rijksakademie in Amsterdam. For some time thereafter he led something of a nomadic artist’s life between Miami, Monterrey (Mexico), Kohler (Wisconsin) and the Villa Medici in Rome; all places where he created works. Currently he is based in Paris.

His beautifully coloured sculptures that take on all manner of forms are full of (double entendre) references and ‘winks’ which mean that their complex interrelationships and meaning is far from easy to define. The themes are often ‘veiled’ in the sculpture or are to be found in the title, in some instances more explicitly. In this way there are examples to be seen from his famous Odore di Femmina – and from the impressive Glorie series.

The artist himself says only little about the background of his work, preferring to let his sculptures speak for themselves. Therefore to a great extent the viewer determines for himself, by association, what he is seeing. In the case of the engaged artist Creten, nothing is simply what it seems. Good examples of this are sculptures such as The price of FreedomandWhy does Strange Fruit always look so Sweet.

As regards his subject matter, mankind and nature offer him an inexhaustible source of inspiration, but classic antiquity, art history, opera, literature and poetry also provide countless subjects. However, this inhoudelijkegelaagdheid substantive layering can also be supplemented with more current, societally sensitive subjects such as politics, racism, balance of power and sexuality. He represents his view of the world as Wunderkammer, or cabinet of curiosities as sixteenth-century collections of objets d’art and curios were called. Johan Creten, himself an enthusiastic collector, kneads all these influences into a wondrous world full of imaginary creatures, flowers and human figures. In this exhibition there will also be on display a number of historical objets d’art from Creten’s own collection; these will shed light on his fascinations and visual motivations, and include a French ivory Sint Sebastiaanfrom circa 1500, an Eskimo torso carved out of a walrus tooth and a bronze Renaissance Venus.

Many of Johan Creten’s sculptures were created in close collaboration with ceramic atelierStruktuur 68 in The Hague and the famous French porcelain maker Manufacture Nationale de Sèvres. The craftsmanship of such institutions in combination with Creten’s artistry produces exceptionally beautifully executed works of art, each of which has its own unique appeal. He also devotes a great deal of attention to the skin of his sculptures. This can be rough or aggressive, covered in crystals and small details, or indeed smooth by the application of a glossy layer of glaze.

Remarkably enough, this lavish visual language has its roots in the most modest of all artists’ material: clay. It is, almost literally, the fertile ground from which Creten’s sculpture arise.

Also to be seen will be the preliminary models and the master cast of the imposing Vleermuisfontein (bat fountain) that Creten is currently developing for the city of Bolsward as part of the Leeuwarden Capital of Culture 2018.

The visitor can take a seat at a number of observation points that will be located around the exhibition in order to look upon and reflect on the works.

To accompany the exhibition will be a richly illustrated catalogue with a written contribution from Joost Bergman.