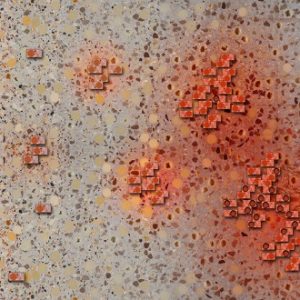 Humans are complex beings made up of trillions of cells, each with their own structure and function. In his monumental sculptures, the Dutch artist Jacob van der Beugel (1978) presents human cells as a ‘biological landscape’. These evocative works show the vulnerability of human cells, but also their ability to mutate, change and adapt. He brings together a sense of the inevitable and a sense of hope through compelling, beautiful works that merge art with science through the unique use of ceramics and new, cutting-edge building materials such as ‘self-healing’ concrete. For Van der Beugel these works are a metaphor for an exploration of the human genome (genetic material) and its capacity to mutate. He invites viewers to question and consider their biological futures and the process of human degeneration; the wasting away of cells.

Central to this exhibition is the understanding that the ‘self’ is forever evolving. Two contrasting ideas, human fragility and the strength and permanence of ceramics and concrete, are brought together to symbolise our desire to live forever, to be ‘forever young’. The works explore ideas of human resilience and the cell’s own ability to adapt. Van der Beugel uses the metaphor of ‘concrete cancer’ to encourage viewers to imagine a future of enhanced human capabilities, of self-adapting, self-healing physical form.

In 2019, Van der Beugel created a spectacular ‘portrait’ of the Dutch Royal family. Titled ‘The DNA Room’, this artwork was installed as wall panels in the recently refurbished Paleis Huis ten Bosch. These ‘portraits’ are the DNA sequences of the King, the Queen and the future Queen. One wall is a DNA ‘portrait’ of the global citizen; a representation of common mankind. This installation followed a ceramic DNA portrait Van der Beugel created in 2014 for the Duke and Duchess of Devonshire, at Chatsworth House in Derbyshire UK, titled “The North Sketch Sequence”.In that work Van der Beugel challenged the idea of conventional portraiture. He offered a new approach to the representation of human identity, expressed poetically through wall-panels studded with delicately torn blocks of clay representing the human genome sequence.

The concept of identity has featured prominently throughout Van der Beugel’s oeuvre. He explores this idea through the interplay of difference and uniformity, evolving his thinking further to include the process of “mutation”. The result is an imaginative work that directs viewers to think beyond their current understanding of what it is to be biologically human. He is inspired by real medical data, scientific research and future technologies intended for use in sustainably built environments.

Four monumental rectangular panels feature in this exhibition. They are evocative, earthy, and abstract works. Each panel is evolving and contributing to the ‘story’ of mutation and is viewed as if from an aerial perspective. These are accompanied by four vertical, cylindrical forms that wear ‘crowns’ of reinforcement steel which appear to unfurl as if in a DNA spiral. Tiny steel filaments protrude from the top, suggestive of the pulsing of human nerves. Each cylindrical sculpture shows a ‘mutating story’ through its use of graduating colour or surface treatment. Objects collected from scientific laboratories and experiments in concrete and ceramics are shown in cabinets of curiosity. For Van der Beugel, these objects have been a rich source of inspiration.

His works are meticulously constructed by hand using ceramic elements, self-healing concrete, recycled concrete and mixed aggregate. Concrete is poured into enormous, structured moulds that are reinforced with steel bars, over strategically placed ceramic ‘cells’ that act as sign-posts to assist the viewer to ‘read’ the panels. Each individual ‘cell’ is carefully constructed with layers of clay, then fired to very high temperatures. This process permanently changes the structure of the ceramic ‘cell’ by fusing the clay particles together. Each panel is then refined, polished and finished with small rectangular ceramic blocks that suggest a point of ‘mutation’.

Van der Beugel invites viewers to think about the idea of mutating genetic material and its potential impact on the design of future medicines.

“We are thrilled to host an exhibition of Jacob van der Beugel this year. His installation, A Mutating Story, is a perfect fit for the museum. It is sculptural and made out of traditional materials, but it is also state of the art and highly innovative. Van der Beugel uses the concrete from which the museum was built as a starting point for the exhibition.”

Van der Beugel, who lives and works in the UK, has exhibited widely both in the UK and internationally. He has been a recipient of the CODAworx Award in the US. The internationally acclaimed CODAawards celebrate the projects that most successfully integrate commissioned art into interior, architectural, or public spaces. He is a member of the Royal British Society of Sculptors, has received several Arts Council Awards for development and research, and has been granted artist residencies at the Wellcome Sanger Institute, York University Epidemiology Department, and Cambridge University Chemistry of Health Department. Van der Beugel has also been assigned significant commissions, which include the aforementioned ceramic installation at Paleis Huis ten Bosch.

2586 The Hague, The Netherlands