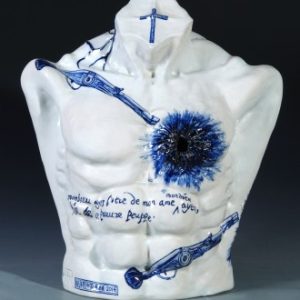 Sculptor Adriaan Rees (b. Amsterdam, 1957) splits his time between Amsterdam, The Netherlands and Jingdezhen, China. Rees’ portfolio includes a variety of materials and techniques. He has worked in ceramics, bronze, plaster, glass, textiles and stone, as well as photographs, films, installations and individual objects. From the very beginning, Rees has worked on major works of art designed for public spaces. Cooperation has always played a prominent role in the large-scale sculptural projects that he has directed for municipalities and provinces worldwide.

Rees first studied to be a physiotherapist, preparing his with an excellent background in human anatomy. In 1992, however, he completed a course at the Gerrit Rietveld Academy in Amsterdam. Rees has remained a staple of the artistic community, appearing in museums, galleries and the public space, ever since. Projects in Dutch cities such as Amsterdam, Leiderdorp and Gouda are interspersed with solo exhibitions at the Frans Hals Museum, the Stedelijk Museum Kampen and the Princessehof in Leeuwarden, as well as shows in Japan and Korea.

Around the year 2000, Rees focused his attention on the culture and art techniques of the East. In Japan, he studied at the prestigious Tokenomori Institute for Ceramic Studies (Shigaraki) and in the INAX Lab (Tokoname). Because of this, he is very skilled in Japanese ceramics and well acquainted with their production techniques. Rees’ predilection for the East is not limited to Japan. He spends almost half of his year in his studio in Jingdezhen, the center of the Chinese porcelain industry. In China, as in Japan, the age-old tradition of ceramics is still alive and kicking. This has made a lasting impression on Rees, who uses much of the same technology and materials.

Ceramics are ideally suited for the outdoor space. Adriaan Rees truly uses ceramics as a sculptor’s material; producing sculpture and larger objects. These works can function in the public space as works of art, decorative art, or as monuments.

The White Album consists of several sections that can be seen in the Cabinet and the surrounding spaces. There are three chapters: the white section, the head section, and the Wanderlust section. These parts are most interesting when taken all together, rather than in a singular context, and examined in terms of art history and topicality. It begins in the centrally located Cabinet, which is completely white. The images and space are white. This world of gaseous whiteness refers to the Gipsotecca in the museum as well as the white plaster sculptures so popular in the salons of the nineteenth century.

On the North Patio, there is a presentation of wall plinths with figures of heads. The Dutch have a word for these sorts of interestingly exaggerated facial expressions associated with costumed stock characters: ‘tronies’. These sculptures are portraits of emotion and feeling. These works are in some cases abstract or curious in shape, in bright colors or earth tones, or capture something of the difficult to define world of emotions that is present in us. In addition, two large sculptures made especially for this exhibition will be featured in the open space.

The corridors are filled with images related to Wanderlust, that old feeling of unrest, the desire to discover the world and the “unheimische” that still occupies an important place in our culture. Rees draws from German Romanticism and the oeuvre of famous painter Caspar David Friedrich to discuss large themes and issues, such as our place in nature or feelings of belonging somewhere. By living permanently both in the Netherlands and in China, Rees knows what it means to feel at home and displaced in several worlds. This discourse is reflected in his oeuvre, manifesting as an ongoing investigation into culture and nature, into feelings of ‘being at home’ and continuing to travel, and, of course, an investigation into one’s own origin and sources.

For Adriaan Rees, it is important to keep thinking about his role as a sculptor for the space in which he finds himself. His conceptualization is larger than the Netherlands alone or his Chinese studio and extends beyond having his sculptures occupy a space in a museum. World traveler Rees experiences and contemplates the issues of globalization and the clash of civilizations in his works. With this exhibition, he asks visitors if it is possible to develop a very specific voice within the international discourse on art as a citizen of the world.