Museum Barberini: Picasso – the Late Work (from the collection of Jacqueline Picasso) 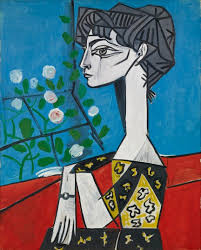 Pablo Picasso (1881–1973) is famous for shaking up art in the 20th century, for resetting the bar in painting, sculpture, printmaking, and ceramics. Not so well-known are the last two decades in his career, when Picasso produced more portraits of his wife Jacqueline than of any other model. The exhibition Picasso: The Late Work shows just how innovative Picasso remained until the end of his life. All the loans are from the collection of Jacqueline Picasso (1927–1986). Her daughter Catherine Hutin granted permission for the Museum Barberini to show these items rarely seen in public. The selection by guest curator Bernardo Laniado-Romero includes many works that are being displayed in Germany for the first time, and a few that have never been presented in a museum before.

In May 1960, when Brassaï met Pablo Picasso again for the first time in almost fifteen years, he was hugely impressed by the artist’s recent work: “But never was I assaulted so brutally as in this villa of La Californie … Art and nature, creation and myth, knights and bullfighting, popular images, Olympus, Walpurgisnacht, all attract your attention … All these things begin to speak at once, competing with one another, pulling you right and left, knocking you over, skinning you alive, reducing you to raw nerves …” At the studio in Cannes, the photographer found himself surrounded by portraits of Picasso’s companion Jacqueline Roque. He could see sculptures and assemblages made of widely disparate materials. Sketches and works on paper using new techniques lay all around. The stylistic variety and the scale of these drafts no doubt contributed to his sense of being overwhelmed. Whereas Picasso’s output in the early years gave rise to distinctly different styles – the Blue Period quite unlike the Rose Period, the exploding shapes of Cubism unrelated to the closed contours of neo-Classicism –, the styles in Picasso’s late work form a synthesis. The media, too, merged: The graphic quality of a line became an expressive element in a painting. In the sculptures, painted surfaces unfold into space, straddling the boundaries between genres.

During the last two decades of his life, Picasso’s work took stock of his past. Revisiting his own œuvre, he picked up familiar themes and revitalized them, but he did so in light of current developments and often in dialogue with other artistic works – from the Old Masters to pop art. Picasso developed ideas initiated by Henri Matisse in his cut-outs. The death of his friend and colleague Matisse in November 1954 unleashed a keen interest in his themes – or, as Picasso put it: “When Matisse died, he left me his odalisques as a legacy.” Picasso returned to the sketches he had made in the 1940s in response to Eugène Delacroix’s painting . In one of the women portrayed by Delacroix, Picasso recognized Jacqueline, with whom he had recently begun a relationship. The following year, he moved into the villa of La Californie with her and her daughter, Catherine. Jacqueline served as his muse and prompted many of Picasso’s depictions of their home’s interior. The rocking chair, her favorite spot, stands in for her constant presence wherever Picasso was working.

Jacqueline Picasso inspired, orchestrated, and administered that overwhelming abundance in Picasso’s studio that Brassaï described. After Picasso’s death, she received an important part of his works when it was divided among his heirs. For the future Musée Picasso in Paris, the French state selected works from all of Picasso’s creative phases, showcasing the full array of his varied techniques. Works from the canonized periods of his oeuvre comprise the bulk of this collection. Picasso’s late work has been best preserved, both quantitatively and qualitatively, within the family – such as the Jacqueline Picasso Collection. It houses pieces which have rarely been seen in the original, although they are well known. They owe their reputation to widely circulated photographs taken by Lucien Clergue, David Douglas Duncan, and Edward Quinn, among others: Picasso and his wife in the studios at La Californie, in the workshop at Mougins to the north of Cannes, and at the family retreat of Château de Vauvenargues in Provence. While the paintings, drawings, sculptures, and ceramics chosen by the state after his death have been accessible to the public at the Musée Picasso in Paris since 1985 – and a representative selection of them were shown in Berlin in the 2005 exhibition Pablo: The Private Picasso, mounted by the city’s Neue Nationalgalerie – many of the treasures from the artist’s studios remained in the family’s possession.

“We are very much looking forward to Picasso in Potsdam! We wish to thank Catherine Hutin, Jacqueline Picasso’s daughter, for agreeing to part with 136 works for the exhibition Picasso: The Late Work. From the Collection of Jacqueline Picasso at the Museum Barberini. Apart from a few exceptions, these are on display in Germany for the first time,” says Ortrud Westheider, director of the Museum Barberini. “In addition to paintings, the exhibition brings together drawings, sculptures, ceremics, and prints, reflecting the creative range of Picasso’s late work. The premiere made possible by this generous loan from her collection illustrates the diversity and enduring topicality of Picasso’s output in the years from 1954 until 1973.”

Picasso’s break with cubism after the First World War puzzled the art world, for his new classicism ran counter to the triumphal march of abstraction. After World War II, which he survived in Nazi-occupied Paris, the artist rejuvenated his œuvre by experimenting with iron sculptures, monumental painting, ceramics, and print-making. In the 1950s and 1960s, Picasso was awarded numerous major commissions such as reliefs in Oslo and Barcelona, murals for the UNESCO building in Paris, a chapel in Vallauris, and the monumental steel sculpture at the Chicago Civic Center created in conjunction with the works on display in the exhibition.

The works for this show in Potsdam were chosen by guest curator, Bernardo Laniado-Romero, former director of the Picasso museums in Barcelona and Málaga, who was responsible for devising the concept, exhibition and catalog. His curatorial approach is to focus on investigating the artist within his own time, in the decades from the 1950s through the early 1970s. “Picasso continued to reinvent himself all his life. Juxtaposing works from different dates reveals the breadth of stylistic expression that makes this period as dynamic as any other,” comments Bernardo Laniado-Romero. “This exhibition offers for the first time the opportunity to see how Picasso moved towards a raw, loosely defined representation of the figure. It is but one indication of the metamorphosis that took place and of the creative energy manifested during the last years of his artistic career. Picasso’s production displays a strength and an inventiveness that the artist preserved until the very end.”
The exhibition is accompanied by a broad program of events and information with lectures, guided tours, concerts, and videos. The Museum Barberini will be working with the Berggruen Collection at the Staatliche Museen zu Berlin to focus on Picasso in Berlin and Potsdam.

The exhibition patron is the Ambassador of the Kingdom of Spain in Germany, H. E. Ricardo Martínez.