Museum Barberini :”Behind the Mask: Artists in the GDR” 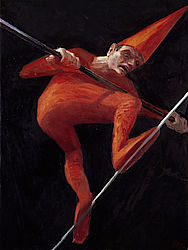 For its first exhibition built around its core collection of East German art, the Museum Barberini looks at how artists present themselves. The show illustrates the diversity of ways in which artists managed to assert themselves in a state that allocated political and educational functions to art and subjected it to regulation. Nevertheless, the exhibition refrains from using political conditions as a springboard, focusing instead on artistic self-perception and self-styling. Embedding artistic production within art history, it explores concrete links with Western iconographic tradition.

In the GDR, the fine arts were seen as supporting the state. Yet artists had their own ideas, defining roles for themselves that far exceeded this function. The Museum Barberini has dedicated Behind the Mask: Artists in the GDR to artistic personalities operating on the spectrum between acting out a public role and withdrawing into a private sphere, between producing within a prescribed collective and pursuing creative individuality.

Through this exhibition, the Museum Barberini has begun to investigate its collection of East German art, which still plays a marginal role in art history. Building on in-house holdings, from which ten exhibits have been selected, the show brings together more than 100 works by about 80 artists (20 of them women), including paintings, photographs, prints, drawings, collage and sculpture.

The curators are Valerie Hortolani and Michael Philipp. The exhibition is accompanied by a catalog of about 270 pages published by Prestel Verlag. The catalog can be purchased for € 29.95 in the museum shop and for € 39.95 from the book trade.

Parallel to the exhibition Behind the Mask: Artists in the GDR, the Museum Barberini is showing a documentary presentation entitled “Gallery from the Palace of the Republic”. These 16 large-format paintings might be read as a testimony to the state policy guideline “Breadth and Diversity” issued in 1971. Against this backdrop of ostentatious officialdom, it is easier to appreciate the rich landscape of East German art that unfolded beyond this domain, and which can be viewed at the show Behind the Mask.