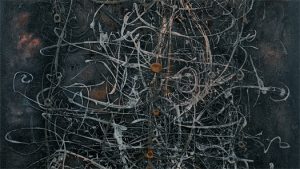 Modest Cuixart (Barcelona, 1925-Palamós, Gerona, 2007), a man of a very broad humanist culture, soon abandoned his medical studies to devote the rest of his life to painting with scientific rigour, but also with a constant restlessness and rebellion towards his own findings.

Entitled “Cuixart: los años cruciales (1955-66),” this exhibition aims for a new look on the work and, above all, the substantial contributions of an extraordinary artist who enjoyed enormous fame and prestige. Given the magnitude of his production, we have decided to limit this exhibition to a crucial period in his career of approximately a decade. Through the works selected from the most outstanding museums and collections, including that of the Juan March Foundation itself, as well as the texts and documentation from the catalogue, the proposal aims to recover the best Cuixart from the most rigorous analysis, but at the same time more suggestive and didactic.

The deep poetic and symbolic capacity of his splendid and well-known work on paper, together with the surreal expressiveness of his manipulated objects -three-dimensional configurations and assemblages-, complement the itinerary of the exhibition and the approach to the artist’s work.

The exhibition proposed here, which will include abundant documentation, as well as the projection of fragments of Fieschi’s film, gathers the best and most representative production of the artist in the period between 1955 and 1966, the true axis of his passionate artistic career.