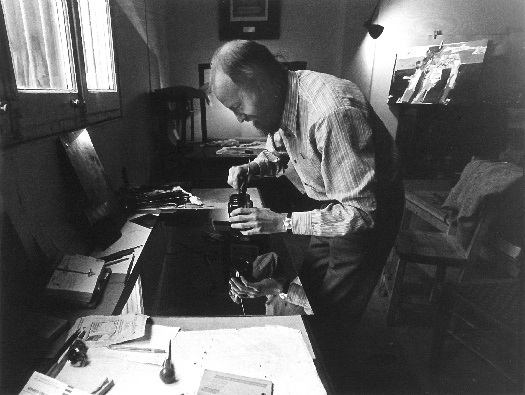 Curated by Alfonso de la Torre, this travelling exhibition devoted to the complete graphic oeuvre of the Canary Islander Manolo Millares, is organised by the Fundación Juan March, the Real Academia de Bellas Artes de San Fernando and the Museo del Grabado Español Contemporáneo of Marbella. It first opened on 10 October 2018 at the Real Academia in Madrid.

Also on display are various original posters, including the earliest by the artist, published by Buchholz in conjunction with Millares’s exhibition in Munich in 1968, a reproduction of a collage (a poster for the Museo de Arte Abstracto Español in Cuenca), and the poster for Millares’s last exhibition, held at the Musée d’Art Moderne in Paris (1971). Shown alongside them are examples of the terracotta stamps from the archaeological collection of the Museo Canario; objects that notably influenced an artist whose highly active career reveals an ongoing fascination with printmaking and graphic techniques in general, both of which left their mark on his particular universe.

The exhibition concludes with a group of five trial prints undertaken in Millares’s studio that were recently rediscovered in his archives, and eight posthumously published prints, with some variants, that were printed at the “Mayor 28” studio in Madrid.