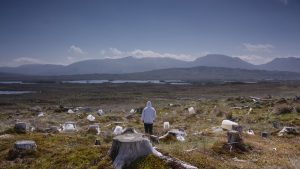 Purple, the most ambitious project to date by the British artist and filmmaker John Akomfrah, is an immersive, six-screen video installation which charts the incremental shifts in climate change across the planet and its effects on human communities, biodiversity, and the wilderness.
Staged across a variety of disappearing ecological landscapes, from the hinterlands of Alaska to desolate, icy Arctic Greenland and the volcanic Marquesas Islands, in the South Pacific, each location prompts the viewer to meditate on the complex relationship between humans and the planet.

Commissioned by the Barbican, London and co-commissioned by: Bildmuseet Umeå, Sweden; TBA21-Academy; The Institute of Contemporary Art/Boston; Museu Coleção Berardo, Lisbon; and the GARAGE Museum, Moscow.