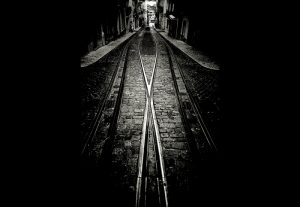 Andreas H. Bitesnich has built up a systematic and coherent body of work around particular cities. He began in 2011 with “New York.” This was followed, in 2012, by “Tokyo,” and in 2013 “Paris.” Then, in 2015, “Vienna.” Finally, in 2017, “Berlin.” Now, it’s the turn of Lisbon, a city that is peripheral in Europe but central to the Western mappa mundi.
His gaze is not contemplative or circumstantial; rather, it is critical and transformative. It takes possession of each place in order to reinterpret it. In this sense, Andreas H. Bitesnich’s photographs are not neutral: they never pretend to be faithful reproductions of the real.
Rather, his work is like the lege artis of a surgeon. He itemises the city in small details, isolating parts of places, moments of human interaction, as though they were pieces of a not-yet assembled jigsaw puzzle that, at some point, will constitute a coherent whole. Indeed, there is no other way of grappling with the city other than in this fragmentary manner better to reveal its dramas and joys, its mysteries and splendours. Bitesnich makes his formal decisions with the aim of sponsoring such an idea: the photographs are mostly in black and white, with no distracting colours. And they are densely eloquent.
In a way, Andreas H. Bitesnich’s gaze transports us to a new geography, one in which the world projects itself through representations that only those who are most attentive might grasp.

The photographs of Andreas H. Bitesnich suggest retreat, a certain melancholy, a large dose of intimacy in which, occasionally, vast metropoles are transformed into small villages that are not always inhabited but, in general, are rich with feeling and emotion.
With his Lisbon project (and his work in other cities), Bitesnich invites us into a kaleidoscope, the outcome of a renewed ability to look, thus unveiling new aspects of the things that surround us. The emotions aroused by looking at Lisbon are part of his rich legacy as an artist. The exhibition at Museu Coleção Berardo brings us the possibility of participating in this journey, free of preconceptions, free of known horizons.