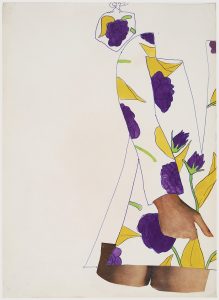 This exhibition presents, in its entirety, works produced almost exclusively between 1965 and 1975, in Portugal and England. Some of them are united by a witty divergence from the commonplace put forward by Pop Art. And, in the case of the Portuguese artists, true defectors from the mediocrity which characterised Portugal, we find a common link in seeking inspiration and motivation from abroad, in Paris and in London in particular, which was a true Mecca in the 1960s.

Critiques of Pop Art began to emerge in the second half of the 1960s. In the case of the Portuguese artists, this was accompanied by experimentation based on this language, whose assimilation in turn appeared to deflect or be deflected, allowing the area of influence of Pop Art to be expanded and transformed. The work produced by Teresa Magalhães at the end of the 1960s, almost unheard of until now, exemplifies this assimilation, while the work of Ruy Leitão, produced in London and inspired by a well informed academic background – the artist was a pupil of Patrick Caulfield who considered him to be one of his most brilliant students –, is situated in an area of critical separation which we term ‘post-pop’. Another common link between these artists is the interventionist thought which they developed regarding the artistic object itself, situating them among initial experiments in conceptual art while maintaining the desire to communicate which underpinned Pop Art.

Here we see the emergence of new artistic languages, experienced first-hand in an Anglo-Saxon context. The English influence in Portugal grew as a result of the departure of many artists to London. The Portuguese artists responded to the anachronistic situation in their country and to the colonial war which began in 1961 and lingered on until 25 April 1974, the date which marked the end of the conflict and the establishment of democracy in Portugal.