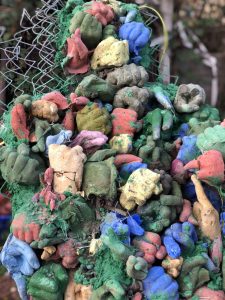 Through sculptural installations, Michael Dean (United Kingdom, 1977) approaches issues related to the use of language, specifically that of writing. His artistic practice focuses on a visual analysis of the language that derives from the written word and, thus, translates the text into the sculptural field. In this way, his installations can be understood as a writing that takes place in space, where the pieces, together with the architecture where they are located and the spectators who observe them, are interacting elements that form part of the same system of signs.

Michael Dean’s works constantly refer to the human body, either through the scale or shape of his pieces, or through the representation of some parts of it, such as eye cavities, tongues and fists. Likewise, for his sculptures, Dean makes use of materials such as concrete, steel, conglomerate wood and other objects that refer to the urban environment, specifically to spaces under construction.

For “Tu texto aquí (Your Text here),” an exhibition organized by the National Institute of Fine Arts and Literature (INBAL) through the Tamayo Museum, Michael Dean presents five concrete and steel sculptures located in the central courtyard of the Tamayo Museum, once again returning to the subject of writing. The sculptures that make up the installation, made for the exhibition at the Tamayo Museum, also refer to the human figure, in this case suggested through an accumulation of fists interspersed with tongues on a large scale.