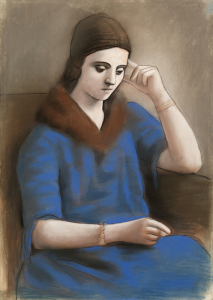 Olga Khokhlova (Nezhin, Ukraine, 1891– Cannes, France, 1955) was the daughter of a colonel in the Russian Imperial Army. In 1911 she joined the prestigious and innovative Ballet Russes company, which was highly successful in Europe at the start of the 20th-century under the direction of Sergei Diaghilev. She first met Pablo Picasso in Rome in the spring of 1917, when the artist was designing the sets and costumes for the ballet Parade. They were married in Paris, on 12th July 1918, and their first and only child, Paul, was born in February 1921. The couple separated in 1935, although they remained married until Olga’s death in Cannes, in 1955.

The Russian ballerina’s travel trunk, which her son received when he inherited the chateau of Boisgeloup –  currently owned by the Fundación Almine y Bernard Ruiz-Picasso para el Arte (FABA) – contained letters and photographs that made it possible to put together a personal and artistic story which developed  parallel to another, political and social, story. For many years, the drawers harboured Kodak envelopes full of photos that told the story of his grandparents, their life together, their travels, Picasso’s ateliers and more. In other compartments lay hundreds of letters in French and Russian, tied with little pink or blue silk ribbons. Olga’s trunk, engraved with her initials, also held her dance attire, ballet shoes, tutus, programmes and other more personal objects, such as a crucifix and a Russian Orthodox bible. The contents of the trunk, which was the only personal belonging Olga kept after her separation from Picasso, meant that aspects of the artist’s work during his time with her were able to be put into context.

Approximately 350 items will be shown in the exhibition, including paintings, works on paper, photographs, letters, documents and films. It has been jointly curated by Émilia Philippot, conservator of the Musée national Picasso-Paris; Joachim Pissarro, professor of art history and director of Hunter College Art Gallery (New York); and Bernard Ruiz-Picasso, co-chair of the Fundación Almine y Bernard Ruiz-Picasso para el Arte, FABA, president of the Executive Board of Museo Picasso Málaga and member of its Board of Trustees. The exhibition has been adapted for Museo Picasso Málaga by José Lebrero, the museum’s artistic director, and Sofía Díaz, its exhibitions coordinator.

The Olga Period
From the moment they met, Olga became the artist’s preferred model and the female figure he depicted most frequently as from the late 1910s, featuring prominently in the early 1920s. The many classical portraits that Picasso painted of his wife show her melancholy, thoughtful beauty at a time when her family in Russia, whom she saw for the very last time in 1925, were experiencing the historic events of the February Revolution, the abdication of Tsar Nicholas II, the Bolshevik Revolution and the ensuing civil war. Olga first appears in fine, elegant lines that show the influence of Ingres. Synonymous with a slight return to figurative painting, Picasso often showed her seated in a domestic environment, reading or writing, no doubt in reference to her letter-writing to her family, who were badly affected by the tragic circumstances back in Russia.

In the meantime, the young couple’s social position rose, as Picasso’s work received growing recognition. New friends joined the couple’s social circle, they attended receptions and spent time on the Côte d’Azur. Their lifestyle improved as their wealth, and even their family, increased, with the birth of Paul on 4th February 1921. Olga was the inspiration for numerous scenes of motherhood, painted with a tenderness and serenity previously unseen in Picasso’s work, while he showed a renewed interest in Classical Antiquity and the Renaissance. Paul was the centre of attention for his mother, who was upset by the news from her homeland. He was also his father’s pride and joy, and Picasso, who was once again interested in the circus as a theme and inspired by childhood games, painted several portraits of his son.

The Metamorphosis
As from 1924 – during the convulsive inter-war years in Europe, when the Surrealist movement was born, Freudian analysis appeared, and there was an awakening interest in African art – Picasso’s imagined figure of Olga began a metamorphosis as their relationship deteriorated, although she continued to imbue Picasso’s work until their separation, and even afterwards. The artist’s encounter with Marie-Thérèse Walter in 1927 aggravated the crisis in their marriage and the couple eventually separated in 1935. Picasso began to depict Olga in an unsettling, distorted and even brutal way, with a violence that expressed both the anger of jealousy and the artist’s own suffering. Meanwhile, his new muse displayed all the energy of youth in his work, along with the erotic feelings she inspired.

Divided between his duty as husband of Olga and father of Paul, and his passion for Marie-Thérèse Walter (who gave birth in 1935 to Maya), Picasso was inspired by Greek mythology to depict his own story. When, in the early 1930s, he identified and depicted himself as a minotaur, a monster with the body of a man and the head of a bull, it symbolised the complexity and ambivalence of his relationships with women. Crucifixions and bullfights – recurrent themes of his work from this point – were intimately linked to the painful experience of his married life. The corrida reflected the violence of combat, occasionally confined to the struggle between the bull and the horse, and this could be interpreted as the fight between masculine and feminine.

After the couple finally separated, Olga’s presence in Picasso’s work became diluted, to be replaced by other models (Marie-Thérèse Walter, Dora Maar and Françoise Gilot), over years in which loneliness and grief broke the Russian dancer’s spirit as she continued to send letters to the man who was still, to her and by law, her husband, until her death in 1955.

The Olga Khokhlova archives
Bernard Ruiz-Picasso tells us that his grandmother (whom he never met, as she died before he was born), was a “mysterious” grandmother to him, as she was very seldom spoken about. A portrait of Olga, drawn by Picasso, hung in the living room of the Paris apartment where he grew up and where his father, Paul, would occasionally execute some of the ballet steps his mother had taught him. It was a desire to learn more about his grandmother that led him to have translations made of the six hundred letters or more, in Russian, that Olga Khokhlova received from her family between 1919 and 1933. These missives enabled him to unravel the tragic and distant fate of Olga’s parents, siblings and relations, while she was enjoying a comfortable life alongside Picasso in Paris.

Olga Picasso provides a new look at her role in both the artist’s life and art history. The exhibition is the result of intense research based on the archives of Olga Kholkhova, the grandmother of Bernard Ruiz-Picasso, who is one of the joint curators of the exhibition and a key figure in the creation and the everyday life of Museo Picasso Málaga. This is undoubtedly the reason why affection and sentiment can be so strongly felt in the MPM exhibition, here in the city of Picasso’s birth.

This touring exhibition is the product of collaboration between four international institutions. The exhibition shown in Museo Picasso Málaga was organized by Musée national Picasso-Paris, in collaboration with Fundación Almine y Bernard Ruiz-Picasso para el Arte. It was seen at Museé national Picasso-Paris from 21st March to 3rd September 2017, and at the Pushkin Museum in Moscow from 19th November 2018 to 4th February 2019, before coming to Museo Picasso Málaga from 26th February to 2nd June, after which it will run from 18th June to 22nd September at CaixaForum Madrid.