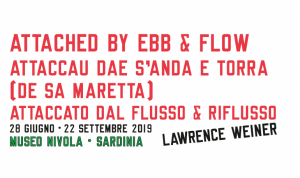 One of the most prominent artists emerging from the 1960s that gave us Conceptual Art and Arte Povera, Weiner began his exploration into the range of possibilities of using language as an artistic medium. In 1968 Weiner set out the basic parameters of his art in his Statement of Intent:

1. THE ARTIST MAY CONSTRUCT THE PIECE

2. THE PIECE MAY BE FABRICATED

3. THE PIECE NEED NOT BE BUILT

LANGUAGE + THE MATERIALS REFERRED TO is the medium Weiner lists within his practice. “The fact is – he states – they are sculptures, since they show the relationship of objects to objects and that is the idea and purpose of sculpture.” With this view, his work exists regardless of its physical existence.

Weiner’s works are descriptive rather than prescriptive. It doesn’t instruct the viewer to perform a particular action or interpret the piece in any unequivocal sense. To the contrary, it presents the viewer with an infinite number of meanings and equally infinite possibilities for realization.

ATTACHED BY EBB AND FLOW references the action of the oceans tides on the shore, relating to Costantino Nivola’s experience of exile and relocation and the island of Sardinia and that would include the migrant crisis and its attendant human destiny. Complete freedom of interpretation is offered to the viewer – any other way to present the work would be considered a “fascistic” imposition by the artist.

“The installation – says Antonella Camarda, director of the museum and co-curator of the show – is thus resonating with the context of the museum and the island, but not tied to it. Against the obsession for site-specificity that runs through many contemporary art practices, Weiner’s work tends to be universal in its appeal to human reason and feelings. A wall is a wall, whether in Orani or New York, as much as it is the structure that allows for the presentation of the work.”

On the walls of the exhibition pavilion – a nineteenth century building which was once the public wash-house of the village of Orani – Weiner’s work is reiterated, connotating the space and suggesting the continuous movement of water (or the repetitive movements of the women doing laundry).

American English, Italian, and Sardu spell the same sentence using different words and verbal constructs. The translation from one language to another and the simultaneous presentation of the three options meet the public’s needs for understanding, root the work in its specific context, and open more possibilities to read and interpret the work.

As the president of the Nivola Foundation and co-curator of the show Giuliana Altea puts it: “something is lost in translation, but much more is to be found. As an example, the first word, ATTACHED/ATTACCATO/ATTACCAU: while English discriminates between attached and attacked, Italian and Sardu don’t, immediately exposing the ambiguity and potential danger of physical closeness”.

With ATTACHED BY EBB & FLOW the museum, in keeping with the legacy of Nivola, continues to explore the possibilities of sculpture as an artistic medium. Agreeing with Lawrence Weiner that  “art is the empirical fact of the relationships of objects to objects in relation to human beings & not dependent on historical precedents for either use or legitimacy”, with this show the Museo Nivola offers the public an invitation to contribute to, discuss, and rethink our cultural, social and political fields.

Museo Nivola in Orani (Nuoro), located in the middle of a park in the heart of Sardinia, is devoted to the work of Costantino Nivola (Orani, 1911–East Hampton, 1988), an important figure in the international movement for the “synthesis of the arts” (the integration of the visual arts and architecture) who also played a key role in the cultural exchange between Italy and the United States in the second half of the 20th century. The museum has a permanent collection comprising more than 200 sculptures, paintings, and drawings by Nivola and organizes temporary exhibitions focused primarily on the relationship between art, architecture, and landscape.

Special thanks to Marian Goodman Gallery

Lawrence Weiner’s project for Sardinia, at Museo Nivola, is a language-based sculptural installation that uses American English, Italian and Sardu to refer to the unrelenting force of the tide.