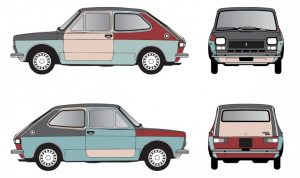 Cristian Chironi’s exhibition I’m back is a reflection on the values and meanings associated with the life and work of Costantino Nivola, an artist active on the international scene of mid 20th-century Modernism but powerfully tied to his home town, Orani, in the mountainous area of Barbagia in Sardinia, a place of infinite returns and departures.

Like Nivola, Chironi also set out from Orani, and is returning there for this occasion, after a series of experiences in various places and contexts as part of the project My house is a Le Corbusier, supported by the Fondation Le Corbusier and now also the Fondazione Nivola.

In the early 1980s, Costantino Nivola, by then quite ill, called his nephew Daniele from his home on Long Island, asking him to go to his house in Tuscany, in a final attempt to bring his belongings back to Orani. Daniele recalls: “He said to me: Go to Dicomano and try to take what’s there. Including the car! There are two art posters of some value… Steinberg… There were his sculptures, paintings… The Picasso wasn’t there anymore…In the end I even left some sketches. Not all of it would fit in the car”.

Daniele left the Port of Civitavecchia with a Fiat 127 full of art, coming home knowing that he had brought back only a small part of that cultural—and existential—patrimony. What was in that car, what had it brought back? A material legacy, to be sure, but also the start of a symbolic relay race, an incitement to “go” and become a citizen of the world.

Decades after that trip, Cristian Chironi is cutting through the residential area and parking the same car in the Museo Nivola’s space for temporary exhibitions, Orani’s old wash house, treasured by the sculptor as a symbolic site of the town’s old community-focused way of life.

It is an artistic and performative gesture that sets the mood for the whole exhibition/installation, which is titled I’m back, bringing the museum space to the road and vice versa, in a journey made up of departures and returns, generational correspondences, encounters, and imaginary visions shot from the car window.

Sitting in the passenger’s seat of a Fiat 127 “Special”, renamed “Chameleon” because it changes color depending on where it is parked, visitors will be able to listen to audio documents and sound compositions from the project My sound is a Le Corbusier, the fruit of collaboration between various musicians (Francesco Brasini, the Radio France Choir, Massimo Carozzi, Alessandro Bosetti). The sound compositions were recorded in various homes scattered throughout the world designed by Le Corbusier, the great master of modern architecture and a close friend and collaborator of Nivola, to whom the architect gave a plan for a house to be built in Orani for Daniele’s father, but never completed: a project that in turn spawned My house is a Le Corbusier.

Playing on Le Corbusier’s famous statement that “a house is a machine for living in” (in Italian, the word “macchina” means both “machine” and “car”), Chironi customized the vehicle with Le Corbusier’s typical color palette and created an environment around it packed with signs of travel and transit, in a playful remix of stories and meanings.

Le Corbusier’s slogan reappears in manipulated form in a 1970s car advertisement that creates a play between Pop, memory, and imagination. The Fiat “Camaleonte” is temporarily stopped by an improbable traffic sign: a “step-stop” that indicates a series of stylized window-sill/steps, and references Chironi’s last trip and stay in Chandigarh (India) and the design of the facade of the Pierre Jeanneret House Museum, where the artist lived for a month. A large sculpture by Costantino Nivola, Madre (Mother), hosted in the exhibition space, is used as a kind of notebook or logbook, its surface serving as a screen for videos beamed from a projector set up on a construction support, a functional tool that accompanies the visitor through the journeys and stops that made up the project My house is a Le Corbusier, documenting the artist’s stays in Italy, France, Argentina, and India. Horizons, like the skyline quickly drawn on the letter from CONI (the Italian National Olympic Committee) inviting Chironi to present his work at the upcoming Winter Olympics in Korea, just as Nivola had been invited exactly fifty years earlier, for the Olympics in Mexico City in 1968.

I’m back is an exhibition about parallel paths, crossroads, detours, leaving and returning home. A journey undertaken by a mad navigator for whom Orani is the center of the world.

Cristian Chironi was born in Nuoro and raised in Orani. He studied at the Fine Arts Academy in Bologna. He uses various languages in his work, often bringing them into dialogue with one another, creating site-specific performances and installations, and always seeking out interaction with the context, both human (the visitors) and environmental (the surrounding space). He lives, works, and presents his art in various parts of the world. His most recent exhibitions include: My house is a Le Corbusier (Esprit Nouveau Bologna; Studio-Apartment Paris; Unité d’habitation Marseilles; Casa Curutchet, La Plata; Pierre Jeanneret Museum, Chandigarh); Lo stato delle cose, 16th Quadriennale, Palazzo delle Esposizioni, Rome; Falsa Torment, Casa Wabi, Puerto Escondido; ECO, CND – Centre National de la Dance, Pantin Paris.