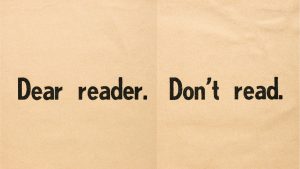 This retrospective—Dear reader. Don’t read—focusing on Ulises Carrión’s personal and groundbreaking approach seeks to illustrate all aspects of his artistic and intellectual work. The exhibition spans from his early career as a young, successful writer in Mexico, to his college years as a postgraduate student exploring language and linguistics in France, Germany, and Britain, to his numerous activities in Amsterdam, where Carrion established himself in 1972 and lived until his untimely death at the age of forty-nine.