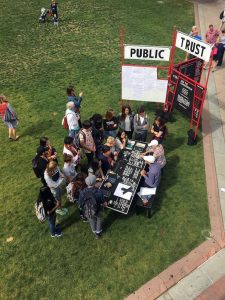 This collaborative artwork in the public space forms part of Agora: A Blueprint for Utopia, a program of commissions for the Museum’s public plaza.

Public Trust seeks to examine the value we grant to our words through the promises we make to each other and to ourselves. During two weeks at Museo Jumex, Public Trust will ask the museum’s visitors to make a promise which will be recorded in a drawing that they can keep. This promise will be published on a large marquee placed in the museum’s plaza alongside the pledges made by politicians, scientists, economists and weather forecasters, which will be procured from the daily news headlines.

Paul Ramírez Jonas considers himself a reader of existing texts that can be any cultural object–a diary, a plan, a photograph–that he reinterprets, as if it were a score, and shapes as performances, sculptures, photographs and videos. In the last decade, these acts of reading have become public in order to formally assert a contract between the work of art and its audience. His projects seek ways to incorporate both the intimacy of a “one-to-one” relationship to traditional works of art, and the “one-to-many” nature of public monuments. With Public Trust, Ramírez Jonas engages with the general public, regardless of the particular background of each participant, in shaping an artwork about the promises and acts of speech that keep a society together.

Paul Ramírez Jonas (Pomona, USA, 1965) has exhibited his work independently at the Pinacoteca do Estado, Sao Paulo (2011); The Aldrich Contemporary Art Museum, Ridgefield (2008); The Jack S. Blanton Museum of Art, Austin (2007); Ikon Gallery, Birmingham (2004); and Cornerhouse, Nottingham (2004). He has taken part in several group exhibitions in venues such as P.S.1, Brooklyn Museum, and New Museum, New York (2001, 2014 y 2001); Whitechapel Gallery, London (1998); Irish Museum of Modern Art, Dublin (1997); and Kunsthaus Zurich (1995). He has participated in the 1st Johannesburg Biennial; the 1st Seoul Biennial; the 6th Shanghai Biennial; the 28th Sao Paulo Biennial; the 53rd Venice Biennial; and the 7th Mercosul Biennial in Porto Alegre. In 2010, Creative Time presented his project Key to the City in collaboration with the city of New York. In 2016 Public Trust was presented by Now & There in Boston. In 2017, the Contemporary Art Museum Houston organized Atlas, Plural, Monumental, a 25-year survey of his work. He is currently Associate Professor at Hunter College, City University of New York.