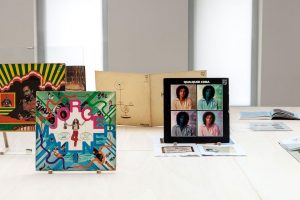 In 1965, a spiritual, political, and artistic movement emerged in an archipelago in the south of Nicaragua: Solentiname. Ernesto Cardenal, a leading poet and priest, established this community in its remote location on Lake Nicaragua. The exhibition Dream of Solentiname looks at this key moment in the relationship between aesthetics and politics in Central America as well as its impact on artists working in New York City during the 1980s as the Contra War against the new Sandinista government was underway.

Marginália 1 presents the work of the late Rogério Duarte (1939-2016), one of the key figures of the Tropicália movement in Brazil. Lesser known than some of his contemporaries, Duarte was a poet, intellectual, music composer, graphic designer, and activist. He was behind some of the most emblematic album covers, film posters, and happenings of the time, but he was also engaged in political resistance and purposefully remained at the margins of cultural production.