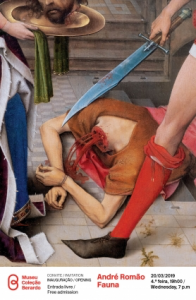 The exhibition will take place on the museum’s floor 0. It is developed into four chapters—one for each room—guided by a free, speculative narrative line built around ideas on survival and the conditions for inhabiting the world, both physically and culturally.

Romão’s work has developed over the past ten years on a diversity of media, from poetry and sculpture to installations and video works. Ultimately, his work has the human body at its core, focusing on its often-problematic interaction with cultural and historical macrostructures, the environment, and economics by means of an extensive collection of small actions, objects, and appropriations. Strongly anchored in poetry, Romão’s work uses or appropriates materials in a speculative manner, deeply rooted in the legacies of both Surrealism and the Baroque—in what can be understood as continuous sabotage of codes and expectations.

On the first chapter of the exhibition, the public will encounter a large acrylic glass model of a factory roof illuminated by a progressively dimming light, recreating a sunset. This will be the beginning of the surreal nocturnal voyage proposed by Fauna. The same room will present an electric generator pollinated by acacia flowers. The presence of plants as such, classified as invasive due to their aggressive behaviour, uncontrolled growth, and high adaptivity, will recur throughout the exhibition.

The second chapter will present a new sound piece: the recording of a text made of altered fragments from Ovid’s Metamorphoses about the shape-shifting character Achelous. The latter embodies ideas of mutation, adaptation, and resistance, as well as a predatory, viral quality analogue to economical processes—such results in a borderless fluidity between Man and Nature, animal, mineral, and vegetable, abstract entities and real inhabitants of the land. The recording was created in collaboration with the former Crass band members Penny Rimbaud and Eve Libertine.

The third room will present a set of new sculptures that continue Romão’s exploration of the contamination of both artificial and natural forms, the hybridization of bodies, and the life-like presence of inanimate materials. The works will be displayed on a large plinth designed with the proportions of the Noh stage.

The fourth and final chapter presents a new video work: Sunset. Filmed outdoors at sunrise, as a response to the first room’s sunset, the video will document the interaction of ferrets with a sculptural fragment of a human body.

This exhibition presents as well a set of objects donated by Ana Hatherly to the Lisbon National Museum of Archaeology.