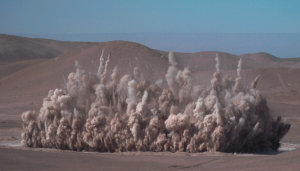 ‘Comedy depends on a rupture with the rational order, it dislocates perspectives and juxtaposes separate actions as if they belong to one another. The sensation disorients, creates patterns of random mosaics and disturbing layers. Nonsense has a power to deconstruct.’ Melanie Smith

Melanie Smith (b. 1965) was born in the U.K. but established her career in the Mexican art scene of the 1990s. Smith moved from the political and economic tensions of Thatcher’s Britain to Mexico in 1989, where she witnessed the impact of capitalist modernisation, neo-liberal globalisation and hyper-consumerism, the development of an informal economy alongside traditional forms of manufacture, and the ongoing failures or collapse of modernity. The two contexts, Mexico, or more broadly Latin America, and Britain, or a wider Anglo-Saxon or Eurocentric culture, are central to her work. Smith’s work embraces a range of media but informs them in unique ways with a persistent reference to painting; nevertheless, she does not describe herself as a painter. This exhibition takes its name from one of Smith’s earlier works, an installation incorporating multiple paintings stacked in front of one another. In her work there is a continuing play between farce (implying absurdity, mockery or travesty) and artifice (meaning both artificiality and deception, and, ultimately, the ‘artifice of reason’), and she applies these concepts to contemporary society and what has been termed ‘baroque modernity’. This exhibition surveys Smith’s work from the early 1990s until today. Rather than follow a chronological arrangement, it is organised according to a series of deceptively simple themes or motifs that recur in her work: Abstraction, Urban, Colour, Body, Archaeology, Nature and Scale. This allows works from different moments in Smith’s career to be brought into juxtaposition, showing the continuities and yet also embracing tensions, conflicts, irrationality and chaos. She has described her body of work as a ‘giant palimpsest’.