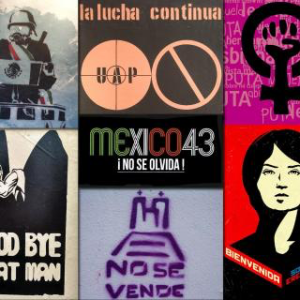 The student movement of 1968 in Mexico is not part of the past, not only due to the commemorations and revisions that have taken place over the last 50 years or to the tributes to the victims of those traumatic events. During all this time, invoking the 68 meant to denounce that the problems to which the movement had responded were still valid –injustice, repression, impunity–and, at the same time, to claim that the forms of social organization and imagination experienced back then continued to be reinvented. The movement of 1968 not only raised a series of political demands that were never fully met, but made it through direct modes of action that were equally unacceptable to the regime. Until today.

The strategies of graphic self-management that were activated by the social and cultural rupture that the student movement of 1968 meant, have been disseminated in later and current disputes. La demanda inasumible (The Unassumable Demand) proposes to examine some of the most significant moments of denunciation and resistance in Mexico from 1968 to the present day, emphasizing the collective, anonymous, and appropriative nature that resides in them. Posters, fanzines, leaflets, patches, stencils, and digital flyers do not appear here as “pieces of a single author” but as part of the field of social dissidence that produced them. That field has been reconfigured throughout these five decades, articulated through the new mass media and responding to different critical situations in Puebla and Mexico.

The demands made by the different social movements represented here have often met with both repression and censorship and with the disillusionment with a political order that has failed to take charge of their aspirations. Graphic self-management stages the profound disagreement between institutionalized power and collective desires. The Unassumable Demand echoes this conflict through the multiple forms taken by the graphic arts and its organizational strategies.