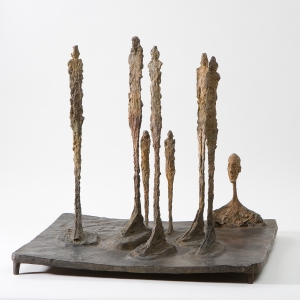 In collaboration with the Fondation Giacometti in Paris, the Musée Maillol focuses on the Swiss artist Alberto Giacometti and present with this overview of his oeuvre, complemented by works by the major classical and modern sculptors of his time.

The exhibition present more than 50 sculptures by the artist, all of which are from the Fondation Giacometti collection, complemented by around 25 works by other major artists such as Rodin, Bourdelle, Maillol, Despiau, Brancusi, Laurens, Lipchitz, Zadkine, Csaky, and Richier.

Giacometti: from one style to another

Via a chronological and thematic itinerary, the exhibition highlight Giacometti’s relations with these artists at each stage of the development of his style. The itinerary thus shed new light on the little-known pre-war period: the first section of the exhibition is devoted to Giacometti’s early works, which still bear the influences of classical modernism (Despiau and Maillol), and then another larger section will be devoted to the discovery of the Parisian avant-garde artists after 1925 (Zadkine, Lipchitz, and Csaky).

The lure of abstraction, on the fringe of surrealism, is highlighted via fascinating comparisons (Brancusi and Laurens). The exhibition focus on the artist’s return to figurative work based on the study of models and explore his mature style. There is many thematic comparisons with Rodin, Bourdelle, and Maillol: the motif of the head, the bases of the works, and inspiration from early antiquity.

A dialogue between sculptures

The major post-war themes (groups of figures, standing women, and walking men) is explored, from their origins in surrealism with Walking Woman (1932) to the iconic works of the 1950s–60s, such as La Clairière (1950), Woman of Venice III (1956), and Walking Man II (1960). Giacometti’s formal orientations are analysed in a novel way via comparisons with various well-known artists, in particular Rodin, and with some of his contemporaries, such as Richier.

To guide the general public, the itinerary is enriched with a selection of graphic arts and archive documents. Echoing Aristide Maillol’s studio, which has been recreated within the museum, Giacometti’s legendary Parisian studio will also be evoked via an ensemble of the artist’s lithographs and photographs taken by some of the greatest twentieth-century photographers, such as Brassaï, Denise Colomb, Sabine Weiss, and Herbert Matter.