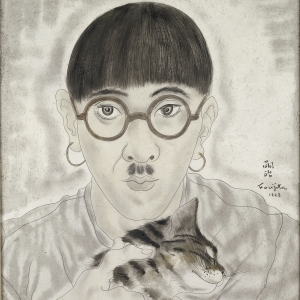 This exhibition devoted to the Japanese artist, Léonard Tsuguharu Foujita, who acquired French nationality, comprises more than a hundred major works, originating from public and private collections, show the exceptional nature of Foujita’s period in Montparnasse—where his friends Modigliani, Zadkine, Indenbaum, Kisling, Pascin, and Van Dongen lived— during the Roaring Twenties. The exhibition focuses on the artist’s first and very productive Parisian period between 1913 and 1931.

The exhibition retraces the unique life of an artist whose career developed between two cultures. From the beginning of his career in Japan to his rise to fame and the discovery of his work, his career eventually led to the creation of a unique persona in the Paris of the Roaring Twenties. His recurrent themes—women, cats, still lifes, children, and selfportraits— are characteristic of his extensive artistic production. Foujita was part of the major modernist movements but never broke away from his distinctive approach, which was consistent with his Japanese origins and the classicism of the great Western masters.
His works are reminiscent of other works—those of his confrères, friends, admirers, and guiding lights—, creating a rich dialogue that makes it possible to assess the originality and complementarity of the artists grouped under the term ‘School of Paris’.

The major works from noteworthy institutions and museums and around a hundred rare works from forty-five private collections in Japan, the United States, and Europe, highlight Foujita’s extraordinary creative genius and invite the visitor to discover the world of an incredible artist. The two monumental diptychs, Combats I et II and Compositions au Lion et au Chien (1928)—loaned by the Conseil Départemental de l’Essonne and which perfectly reflect the Roaring Twenties and are at the heart of the exhibition—, show the incredible power of Foujita’s work and its influence on the period. The scenography, designed by Hubert le Gall, highlights both the fantasies of the extravagant man and the various stages in his rise to fame as an artist at the height of his powers.

The exhibition shows the talent of the artist who loved drawing, and who, like his illustrious predecessor Hokusai, painted with great skill. Foujita’s drawing is incredibly assured and his lines have an exemplary calligraphic finesse, achieved through the use of sumi (Japanese black ink) on paper and in his oils. Colour played a secondary role in his works, but was used in such a decisive way that it enhances the drawing. The subtlety of the gouache and watercolour fills the forms with layers of flat colour, creating subtle effects of transparency in his oils. His gold backgrounds strengthen the impression of refinement and preciousness.

Fifty years after Foujita’s death in 1968, the Musée Maillol is highlighting the luminous and unique work of the most oriental painter in Montparnasse.