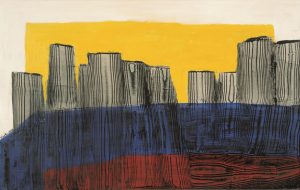 The Mosaic Rooms opens the first UK exhibition dedicated to Behjat Sadr (1924-2009), now regarded as one of Iran’s most influential and radical visual artists. The exhibition will bring together a selection of major works by the artist never seen before in the UK. Curated by Morad Montazami, the display will reveal Sadr’s dramatic artistic journey against the backdrop of bitter political events and reveal her struggles as a woman fighting for recognition on a male dominated art scene.
Each of the three gallery spaces at The Mosaic Rooms will be dedicated to a city that was instrumental in shaping Sadr’s practice. Sadr’s own career path is evidence of a cosmopolitan modernity that was emerging in and between Tehran, Rome and Paris, where the artist eventually settled after the 1979 Revolution.
Artworks and archive material explore Sadr’s time in Italy and her first encounter with Western modernity in The Mosaic Rooms’ entrance gallery. Alongside other young Iranian artists including Bahman Mohasses and Mohsen Vaziri Moghaddam, Sadr studied with Professor Roberto Melli at the Academia in Rome in 1955. During this time Sadr developed her signature style informed by European modernism and the local experience of modernity in Iran.
Sadr’s time in Tehran, Iran, is the focus of the main gallery. Her practice developed significantly and Sadr earned her reputation as one of the first women artists and professors to appear in international biennales of the early 1960s. The display focuses on the artist’s remarkable kinetic works and paintings created solely using black paint with bold and dazzling results. Sadr is best known for her abstract paintings that blend expressionistic gestures inspired by natural forms with a hard-edged industrial aesthetic.
The third gallery explores the artist’s collages, most of which Sadr created whilst in exile in Paris. She felt excluded as a foreigner from Paris’ close-knit art scene and ill health prevented her from maintaining a painting practice. During this final period of her artistic life Sadr developed an introspective experimental practice through collage. The display also features numerous personal photographs, of her travels in search of modern and vernacular architecture worldwide, and her “atmospheric visual atlas” of landscape photographs which she used in her cut outs.
This exhibition is part of The Mosaic Rooms’ 10 Years anniversary programme which runs until September 2019, a series of six exhibitions presenting modernist and contemporary artists from Egypt, Iran and Morocco. The exhibition is accompanied by a programme of screenings, artist’s talks and events.
Behjat Sadr (1924-2009)
Behjat Sadr was born in Arak, Iran in 1924. After studying at the faculty of fine arts at the University of Tehran, Behjat Sadr went to Rome, where she graduated toward abstract painting and informal art. Leaving frames and traditional colours behind, she used synthetic industrial paints that she ran on supports placed on the ground. When she returned to Iran at the end of the 1950s, her experiments with subject and gesture were quickly noticed by Pierre Restany and, later, Michel Ragon. In the 1980s, she split her time between Paris and Tehran, produced photomontages in an unusual style reminiscent of her painting. Her work has been exhibited in many institutions internationally: Galleria La Bussola, Rome (1958); Venice Biennale (1956, 1962); Musée d’Art Moderne de la Ville de Paris (1963); Grey Foundation, Saint Paul, Minnesota (1971); Musées Royaux des Beaux-Arts de Belgique, Brussels (1972); Centre d’art Le Noroît, Arras (1985); Grey Art Gallery, New York (2010); Asia Society, New York (2013-2014); Musée d’art modern de la ville de Paris / MAXXI Rome (2014-2015). In 2004, the Tehran Museum of Contemporary Art devoted a large retrospective to her, as part of the series of exhibitions devoted to pioneers of modern art in Iran.
Morad Montazami
Morad Montazami is an art historian and curator. His research interests are cosmopolitan modernisms and histories of the avant-garde between trans-Arab, Iranian and Mediterranean zones. He has published essays on Farid Belkahia, Bahman Mohassess, Behjat Sadr, Mohamed Melehi, Mehdi Moutashar, Latif Al Ani, among others. He curated the exhibitions Bagdad Mon Amour at Institut des cultures d’Islam, Paris, 2018, Fugitive Volumes and Faouzi Laatiris: Catalogue déraisonné at the Mohammed VI Museum of Modern and Contemporary Art, Rabat (2016) and co-curated the exhibition Unedited History: Iran 1960-2014 at Musée d’art moderne de la ville de Paris and MAXXI, Rome (2014). He is the director of Zaman Books Publishingand its related journal Zamân. He is a research curator at Tate Modern, London.
mosaicrooms.org
The Mosaic Rooms
226 Cromwell Road
London SW5 0SW
United Kingdom