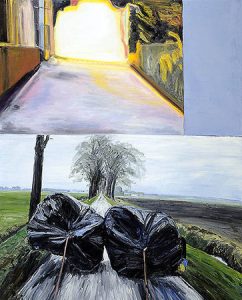 In order to prevent misunderstandings: The title of the current exhibition at the Morat Institute in Freiburg, “Nature – Culture, Hans Rath / Jan van der Pol, Pictures and Drawings” sounds like a double exhibition, but does not mean any. Instead: Two artists of the Morat Foundation present their works in two solo exhibitions. 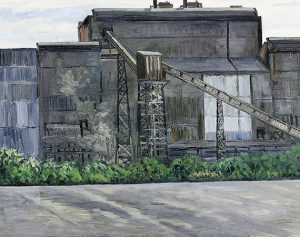 Hans Rath does not work in the studio for photographs, but quickly outside, in front of the motif. A flared series of trees illustrates why this must be so. The wet-in-wet-formed stems, branches and leaves carry the color differentiation of the immediate experience of nature. They illustrate the process of how the artist laid down the three-dimensional view on the two-dimensional surface of the canvas. Even if the motive could lead to it – it’s not about romance here.

Like the confused images of a dream
For the fascination for the connection between reality and painting and for a perception that is also looking for the traces of change. This idea forms everything, including the portraits of friends and acquaintances that Rath shows in the cabinet, as well as the architecture, the industrial buildings that meet the urban landscapes of Jan van der Pol in the middle hall. A company site in France appears in six different views. Over the course of several years, Rath has repeatedly returned to this place, has circumnavigated his motive and made sure of his own view of what has been found.

For Jan van der Pol, born in Aalsmeer in 1949, painting is also a means of dealing with reality. He has collected hundreds of pictures from television and magazines to intuitively combine them into new, associative stories in his mostly multi-part paintings. While the artist is making rapid progress during the painting process, there are numerous photographs in front of him that repeatedly provoke overpainting and metamorphoses. In the end, every section of the picture is equally important, and all parts do not act chronologically, but simultaneously. The development of the Spanish coast, the construction of a new city in China – the landscape changed by humans plays a major role. Jan van der Pol shows how he experiences the world. But is it possible, even from the worst, to make pictures of the most cruel news of world events? Van der Pol is looking for highly charged moments in content, looks at the Fukushima catastrophe, a Stalinist prison camp and shows the mutilated victims of a serial killer. He documents in his “Nachtbuch” that painting and drawing are equally important to him. Like the confused images of a dream, the individual pages of this voluminous sketchbook run from the eye of the beholder: the dead Gaddafi, Mengele, a wild mixture of war and crime. In between there are quiet views of monuments and landscapes, funny animal representations and drawings of cuboids and spheres.

The hard-to-tolerate coexistence of horror and beauty – Jan van der Pol paints and draws, not least “in order to deal with it”.