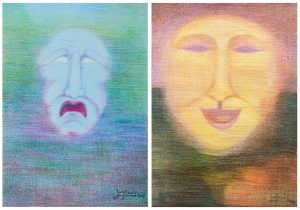 Sager Al-Qatil: The Primacy of Plot examines the artistic work of late Palestinian artist Sager Al-Qatil (1959-2004), primarily those made during two decades of extremes: the 1980s and 1990s. In Palestine, these years were marked by the beginning of the First Intifada, or revolutionary movement, and subsequently, a more prosperous economy ushered in by the Oslo Accords, signalling the death of political sovereignty. It represented a fissure in opinion and aesthetics within artistic circles: To defend, and look back at, a paradise lost, with all of its imagery and symbolism, or to learn to navigate what appeared to be a momentary ceasefire, but in reality, was a new, more fractured world?

Envisioned as a contemporary account of tragedy, The Primacy of Plots is an exhibition and public program featuring three groupings of 24 paintings and drawings—all of which propose a new form that is anti-canonical — based on motifs within Al-Qatil’s body of work, ranging from estrangement and escapism to motherhood, masculinity and psychotropics. Taking its cues from a concept used by Aristotle in Poetics to describe the imitation of action and life, the exhibition will demonstrate Sager’s uncanny and obtuse outlook on life, using themes borrowed from psychoanalysis, gender studies and philosophy.

From Sager’s childlike, elementary and sexual iconographies of birth and sexuality, his esoteric drawings and his frottage of theatrical masks, androgynous creatures and epic literary symbols, the conflict between self and external stimuli repeat throughout his oeuvre and play a central role in the exhibition.

What might one learn by following the peripatetic life of an artist who grew up in Gaza, came of age in the West Bank, worked as a day labourer under Israeli occupation and later witnessed the dispossession and fragmentation of his society from Europe, where he died prematurely in a Dutch prison?

opens February 21, 2019, and will run parallel to a public program featuring artist conversations, performances and film screenings until . A publication with commissioned essays will be launched at the closing of the exhibition in May 2019.

Curated by Yusef Audeh and in collaboration with Noura Salem, assistant director at the MMAG Foundation.

The MMAG Foundation
The Mohammad and Mahera Abu Ghazaleh Foundation brings together artists, curators and researchers from the region and beyond. MMAG hosts exhibitions, workshops, studios and residencies, as well as the Lesser Amman Library. MMAG is currently developing an art school, set to open in 2020.