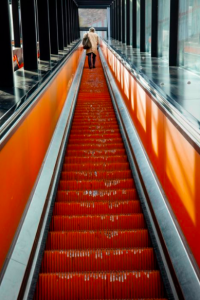 Till Brönner, highly-acclaimed musician and photo-artist, has embarked upon an unusual mission, deep into the heart of the Ruhr region. Over a period of 12 months, Germany’s No.1 jazz musician travelled across one of Germany’s most diverse and ambivalent regions, photographing people and places to fashion a highly personal view of the faces, industrial architecture, natural and cultural landscapes, transportation infrastructure and urban environments, and of the vibrant co-existence of the diverse nationalities, cultures and religions making up Germany’s largest conurbation: the Ruhr metropolis.

Featuring strongly is the region’s rapidly disappearing coal mining industry. It not only lends its name to the title of the exhibition, but also left an indelible impression on Brönner by virtue of its pervasive legacy and symbolism: “Throughout its history, the Ruhr region has fulfilled various roles. It was the armoury for two world wars and the engine of Germany’s economic miracle before falling into steep decline – my interest focuses on the impact this has had on the people.” Consequently, it is the people who provided Brönner with his most rewarding point of access into the region. And regardless of whether they confront the viewer as the proverbial icons or remain more in the background: Each of them has in his or her own way helped to shape the Ruhr region.

Hitherto unpublished, the findings of Brönner’s photographic exploration are to be presented in the MKM in Duisburg not only for the first time, but also in the artist’s most comprehensive exhibition to date.

Till Brönner (born in 1971 in Viersen) is regarded as a true cosmopolitan. Having lived and worked for many years in Berlin and Los Angeles, he calls everywhere his home. For the past 10 years the musician has also achieved success as a photographer. In 2015, his photobook “Faces of Talent” (teNeues), featuring insightful b/w portraits of fellow musicians and other famous celebrities aroused considerable media interest.

A joint exhibition of the Foundation for Art and Culture and the Brost Foundation.