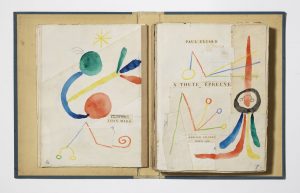 The collaboration between Joan Miró, the poet Paul Éluard and the publisher Gérald Cramer to create their 1958 edition of Éluard’s À toute épreuve produced one of the most important of Miró’s artist’s books, and indeed one of the most beautiful and visually thrilling books of the 20th century. The poems were the product of events of 30 years earlier that had passed into Surrealist myth: the breakdown of Éluard’s relationship with Gala, who left him for Salvador Dalí. They were first published by André Breton’s Éditions surréalistes, printed on four folded pages and resembling a leaflet. Working in intense team sessions, Éluard, Cramer and Miró re-imagined it as an entirely new object. It was Éluard, looking back to Mallarmé’s Un coup de dès n’abolira jamais le hasard, who decided to re-distribute the lines of his poems so as to leave white spaces eloquent enough to demand a response from the artist. It was Miró, looking back to Gauguin and Japanese print-making, who decided on the labour intensive practice of woodcutting in pursuit of a book as sculpture.

Curated by Christopher Green with the collaborative support from the Collections Department of the Fundació Joan Miró, Éluard, Cramer, Miró ­– “À toute épreuve”, more than a book reconstructs the history of this artist’s edition. The project also aims to put the spotlight how Miró managed to accomplish something he had aspired to for years: the creation of a book-object that went beyond illustrating the words of the poet to become something close to a sculpture.

With the complement of other documents mainly from the Archive Gérald Cramer in the Musée d’Art et d’Histoire de Genève and the Bibliothèque de Genève, this exhibition gives visitors their very first opportunity to view À toute épreuve in its entirety beside five of the six maquettes that have survived. The exhibition also includes more than 30 wood blocks, carved by Miró with the help of the Barcelona printer Enric Tormo. The book was printed from these blocks by Jacques Frélaut and Jaime Herrera of the Atelier Lacourière in Paris.

Three of the maquettes on show are conserved in Barcelona in the Fundació. Two of them bring together early layouts of the poems by Éluard and Cramer, the printed texts stuck to the maquette pages, along with copy drawings of Miró’s early ideas. The third of them, Miró’s Maquette, is filled with the artist’s own studies, drawn at speed as he responded to Éluard and Cramer’s typographical lay-outs of the poems. He often developed his ideas by superimposing successive layers of papers. The ideas he ended with here were then transferred to the wood blocks. Miró’s Maquette is unbound, so selected pages from it can be shown next to the book pages they relate to, revealing the distance travelled between drawings and woodcuts.

“The book alone, presented in its entirety,” says the curator, “makes a powerful visual impact, when experienced page opening by page opening. To show it beside the wood blocks brings out its true sculptural character: the origin of the prints in wood as a material is never forgotten. By adding the maquettes, the exhibition invites visitors to make the journey from the beginning of the book’s making in 1948 to its final publication ten years later, going back to the intense creative dialogue out of which it grew between the poet, the publisher and the artist.”