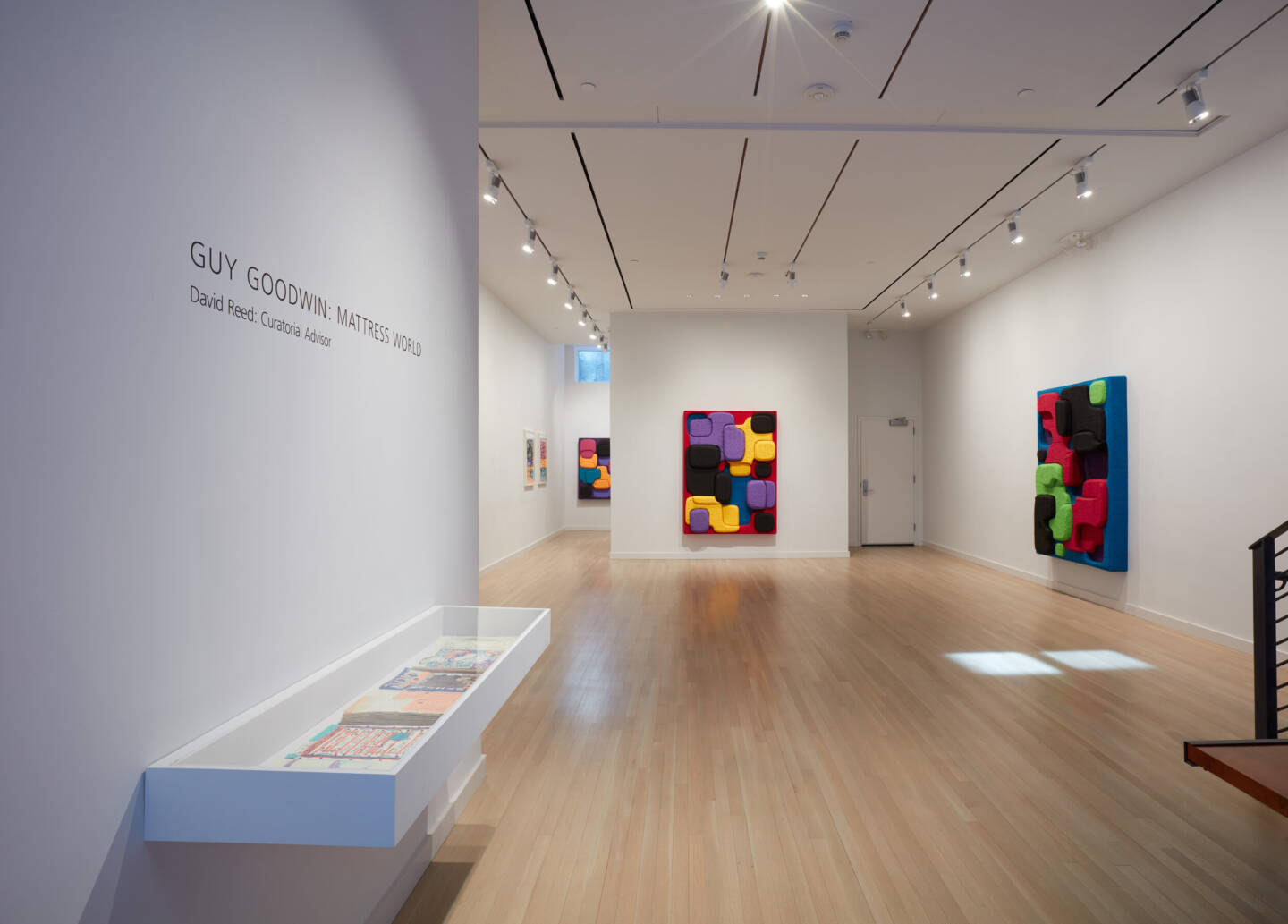 When I first came to New York there was a feeling that anyone could join the ongoing dialogue about art. If that misfit leaning against the wall, smoking a cigarette in Life magazine could be America’s best painter, who knew what might be possible. Good art could come from anywhere. We, as artists, decide for ourselves.

In the early ‘70’s I often went to several bars in Soho, including the Broome Street Bar. I would go in the evening hoping to run into other artists. One night there were a number of painters that I knew, including David Diao and Stuart Diamond. They were having an arm wrestling contest at one of the tables at one of the windows in front. The person to be winning was someone who I hadn’t met. He was wearing a leather jacket, boots, jeans and spoke with a slight southern accent. The talk was about Cezanne and they all agreed about what a tough painter Cezanne was. I tried to argue that Renior was just as tough. No one wanted to listen to me. I finally got up and went to sit at the bar. After a while the arm wrestler in the leather jacket came over and sat at the stool next to me. He said that he had something to show me. He reached into the left front pocket of his jacket and pulled out a worn, dirty, dog- eared postcard. Saying that it was his favorite painting, he handed it to me: a young girl standing before flowering bushes in the sunlight, a Renior. That was my first meeting with Guy Goodwin.

We exchanged studio visits in 1988 Guy and I taught together for the summer at Skowhegan in Maine, becoming even closer friends. In 2006, I was the advisor to the curator Katy Siegel, for “High Times,Hard Times: New York Painting 1967-1975”, an exhibition organized by the Independent Curators International. The first venue was at the Weatherspoon Art Museum in Greensboro, North Carolina. Jack Whitten and Guy Goodwin had work in the show and were the only two artists who came down to be with us for the installation and opening. They spoke together on a panel that Katy organized. I found out that both grew up near Birmingham, Alabama, and Listened to the same black DJ on the radio.

Guy and Jack shared an attitude towards materiality in painting with other artists of their generation. Quite a few painters in the show ], which had a wide definition of what a painting could be, worked in three-dimensional, shaped, surfaces to emphasize the material qualities of the paintings: Ron Gorschov, Joe Overstreet, Alan Shields, Elizabeth Murray, Ralph Humphrey, Mary Heilmann, Howardena Pindell, and Richard Tuttle. Other slightly younger artists, Such as Marilyn Lenkowsky and Dona Nelson, Also used three-dimensional supports. Such paintings can’t be seen from one viewing point or at one glance. THey have to be seen over time while looking from different points of view. The paintings really come to life while one moves in front of them. Then the painted shapes no longer remain flat and can seem to shift and transform in unexpected, shift position and twist.

Guy builds his forms and the shapes of his paintings out of cardboard. He loves cardboard and because of knowing him I’ve realized what a strange mysterious material it is. One can think of cardboard as a barrier or as a container and it always is involved with travel and transport. It is every-day and ubiquitous, but there are very exotic and specific kinds. At night Guy scavenges what he uses off the streets. He knows locations and times when the very high end kinds of cardboard that he prefers will be discarded. He thinks that the cardboard he likes best might be used to ship fine couture or computer parts from Asia. He cleans off the extraneous tape and labels and builds the forms in layers, stapling the cardboard in place and soaking it with glue – a difficult and time – consuming process.

Guy’s paintings, the colors, forms, and materials, remind me of the booths in country cafes, diners, and nightclubs. In all of these different environments the booths are plush, upholstered, promise comfort and privacy. The seating turns inward but the booths are designed to be private. They offer the illusion of privacy, displaying it to others, while still being accessible to food service. A couch or a bed at home can be sensual and intimate. Booths are not. They promise an exaggerated accommodating comfort which they can’t provide. The clear or brightly colored vinyl coverings, artificial Naugahyde, or faux cloth upholstery are hard and inflexible, made to clean easily and to disguise dirt and wear, not to be touched or to be comfortable. It’s fun to sit at these booths because they make us aware of how easily our desires can be exploited.

Guy’s title “Mattress World” seems to imply that his paintings are like mattresses, but if so, they are strange mattresses. I’m not sure that I would sleep on one, they are too hard, and the bulges seem like they would move by themselves, not conform to my body. And the word “World” in the title doesn’t mean that all the world could become like living on a mattress, a place in which all our desires would be met. When telling me about how he came up with the title of the show, Guy told me about his experience at “Major World”, a used car sales emporium in Queens, where they used aggressive sales practices to try to convince him to buy a van for more than he wanted to pay. This is the “world” of his title, but to the wider, social, and even commercial world all around us. The Contradiction between the privacy we hope for on a mattress and the implications of this kind of “world” makes the title funny and gives it complex undertones. I’d prefer to have my mattress in my world, not in “mattress world”.

The unusual colors in these new paintings also cause layered reactions. At first the colors seem attractive and joyful, seemingly to be Pop, advertising colors. But then one becomes aware that the colors are slightly off key, interacting in unusual and sophisticated ways. Like the shifted and adjusted primaries in Mondrian’s paintings. These colors  unexpectedly suggest complex moods and remembered emotions. Guy’s colors also remind me of Los Pollos Hermanos, a chain of fried chicken restaurants run by the gangster, Gustavo Fring, in the televised crime drama “Breaking Bad”. Not really “restaurants”, they are fronts used to launder money and provide logistics for illegal activities. All the signs inviting one in and all the surfaces inside Los Pollos Hermanos are plastic: white, yellow, red, and blue. The colors should make a mood like that of Wonder Bread  advertising and packaging, a joyful partying mood that disguises what is really being sold. But like Guy’s colors in his reliefs, the colors in Los Pollos Hermanos reveal the actual , real emotions that the Pop advertising colors attempt to disguise. There is a sadness and self-awareness revealed that does not fit the assumed purpose of the color. Perhaps a false cover story can’t help but reveal the real story when something as subtle as color is involved.

About 30 years ago, while he was teaching and living in Chauncey, Ohio, Guy showed me some notebooks in which he had drawn obsessively. The drawings often began on advertisements or clippings from newspapers – social and political issues of the day. He drew on these images and abstract patterns, writings, and short texts, and often dramatic dialogues. Until I saw these drawings, I didn’t know that Guy had a secret practice that ran parallel with his paintings. He told me that he drew in the notebooks for himself, things that he had to work out; they would never be shown. I often thought about the drawings  and they have changed my understanding of his paintings. When Guy planned a show, I always encouraged him to include the notebook drawings. He always refused, after 30 years of my nagging, he has finally agreed. I know that I could not have convinced him. He must feel the time is right.

Guy says that a number of his “mentors” were musicians ten ot fifteen years older. One was the jazz drummer and percussionist, inventor, sculptor, and martial artist, Milford Graves. Graves based the rhythms of his drumming on the irregular, changing rhythms and the different tones of the heart. He recorded and studied the beating of the human heart and found that it was not as regular as is assumed. Different hearts have different intervals between beats and different complications to the beat. Guy says that when you visited Graves, he might record your heartbeat to use in his studies.

Guy’s painting in the “High Times, Hard Times” show, and the group of related paintings from that time were inspired by listening to “Freedom Suite” (1958) by Sonny Rollins and Max Roach. He played the recording for a year “as neighbors lost their minds and finally made me stop”. Max Roach wrote the pared – down composition for Rollins, Oscar Pettiford plays the bass. The music is very emphatic and basic. Guy calls the structure which he repeats over and over again -”focused improvisation”. He says he was “a 34 – year old who didn’t know too much” and that the music helped him understand what he  was doing. Each of his paintings had only five or six moves, moves that were repeated in sequence in each of the paintings. “Freedom Suite” is a call for musical and political freedom”.

I often wonder how Guy gets his strength. His new paintings are his best ever and he never stops pushing and working, developing what he is doing. He is unbelievably stubborn. Usually when I call Guy at his studio at night, I hear jazz playing in the background. Sometimes I think that it is the music that must give him the strength.