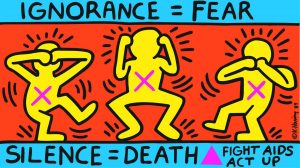 The extensive group show United by AIDS—An Exhibition about Loss, Remembrance, Activism and Art in Response to HIV/AIDS sheds light on the multifaceted and complex interrelation between art and HIV/AIDS from the 1980s to the present. It examines the blurring of the boundary between art production and HIV/AIDS activism and spotlights artists who have been leading voices in this creative discourse, which remains vital today. The presentation gathers positions that illustrate the diversity of the (artistic) response to the HI virus and AIDS, with an explicit focus on works that address themes such as isolation, transformation, and the inexorable passing of time and mortality in relation to the politics of the body and representation. Since the introduction of highly active antiretroviral therapy in the second half of the 1990s, AIDS has widely come to be seen as a phenomenon of the past, with little significance for the life of our societies today. On the global scale, however, deaths due to complications from AIDS still number almost one million per year. Divided into four chapters, the exhibition seeks to untangle the complex and diverse narratives around HIV/AIDS and discuss their fragility in a contemporary perspective.