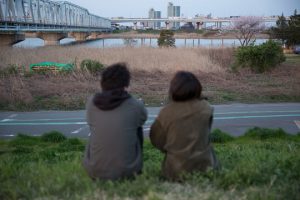 In view of the worldwide rise of nationalism, populism, and xenophobia, the artistic social studies of Koki Tanaka (b. Tochigi, Japan, 1975) focus on how we live together in societies. Realized especially for his exhibition at the Migros Museum für Gegenwartskunst, the project Vulnerable Histories (A Road Movie) (2018) focuses on an example from Tanaka’s native country, the mutual incomprehension and mistrust between Zainichi Koreans and ethnic Japanese, to plead for vigilance when it comes to racism and discrimination. The project centers on a series of conversations in various settings between two protagonists who have not met before. Shadowed by the artist and his camera team, they travel to several locations in Tokyo to grapple with questions of (their own cultural) identity and how to take a stand against the simplistic and selective worldviews of racist groups. The films that grew out of the project illustrate that coexistence and mutual appreciation are possible if we talk to each other: private as well as public conversations are key. The exhibition provides a framework for continuing the exchange of ideas Tanaka initiates. “Live speakers”—representatives of the art and academic worlds whom visitors are encouraged to approach—will be available for the entire duration of the presentation to foster further discussion in a variety of formats.

The exhibition is curated by Heike Munder, director, Migros Museum für Gegenwartskunst, and is the artist’s first solo show in Switzerland. An accompanying monograph will be released by JRP|Ringier during the second half of 2018.

Koki Tanaka lives and works in Kyoto, Japan. His work has been presented around the world, with recent exhibitions at the Kunsthaus Graz (2017), the Deutsche Bank KunstHalle, Berlin (2015), the Van Abbemuseum, Eindhoven (2014), the National Museum of Modern Art, Kyoto and Tokyo (2013), the Museum of Art, Seoul (2013), the Hammer Museum, Los Angeles (2012), the Taipei Contemporary Art Center (2012), Centre A, Vancouver (2010), the Hara Museum of Contemporary Art (2009), the Palais de Tokyo, Paris (2007), and elsewhere. Tanaka officially represented Japan at the 55th Venice Biennale in 2013 and was Deutsche Bank’s Artist of the Year in 2015. In 2017, he participated in Skulptur Projekte Münster and the 57th Venice Biennale. 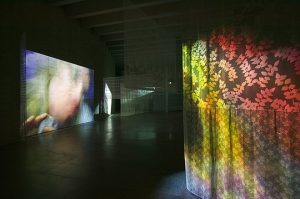 Collection on Display presents a work by the video artist Pipilotti Rist from the collection of the Migros Museum für Gegenwartskunst: Show a Leg (Raus aus den Federn) (2001), a sprawling installation composed of video sequences and colorful spotlights sweeping over panels of variously textured curtain fabric; in conjunction with the hypnotic soundtrack, they immerse the visitor in a dreamlike scenery. The protagonists of Show a Leg—as of many of Pipilotti Rist’s works—are strong female figures: conscious of their own vulnerability, they rebel against social and moral as well as self-imposed constraints and playfully savor their newfound self-determination.