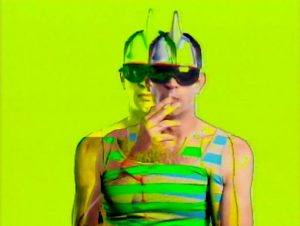 Complex video installations and seminal films documenting dance and performance art have made Charles Atlas (b. St. Louis, Mo., 1949) a leader in the field of film and video art. Atlas rose to renown with projects on which he worked with choreographers including Merce Cunningham and Michael Clark as well as the fashion designer and performance artist Leigh Bowery. His network of creative collaborators largely coincides with his circle of friends: many of his works from the 1980s and 1990s are portraits of fellow protagonists of the New York underground scene and the contemporary milieu that scrutinize aspects of biopower and the politics of bodies and identity. The defining feature of Atlas’s work is his ongoing investigation of the expressive potentials of time-based media. He explores questions of the segmentation and structuring of the visual space as well as contemporary issues in the politics of representation. The exhibition at the Migros Museum für Gegenwartskunst, the artist’s first solo show in Switzerland, unites five video installations from the past two decades.

The exhibition is curated by Raphael Gygax. An accompanying monograph will be published by JRP|Ringier in the second half of 2018.

Collection on Display showcases selected works from the collections of the Migros Museum für Gegenwartskunst. The new exhibition puts the focus on sculptures by Oscar Tuazon and Banks Violette. Despite the considerable differences between their formal aesthetics, both artists’ works point up the fragility of our existence. Tuazon’s sculptural objects bear the marks of physical disintegration; Violette signals decay with a symbolism derived from the iconography of heavy metal music.