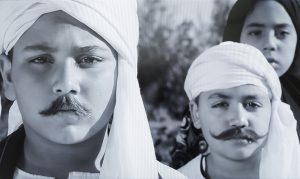 The site-specific installation centres around the Wael Shawky’s (winner of the first edition of the Mario Merz Prize) then newly commissioned  film trilogy ‘Al Araba Al Madfuna’, presented together for the first time. Here, the viewer is led through a series of immersive environments that physically compile the films’ contents – architectural set designs and sculptures. The installations, specially created for the exhibition, create an original atmosphere drawn from the historical, literary and cinematographic references from which the artist has built his stories.

Al Araba Al Madfuna continues Shawky’s interest, explored in several projects over the last decade, in using existing stories and histories from our culture, as a point of departure for cinematic exploration. Shawky’s work is based on historical narratives, sociological interpretations, and fictional writing, from which he constructs his way of looking at past myths alongside the realities of the present.

The films are inspired by Shawky’s visit to the village of Al Araba Al Madfuna, near Abydos, the archaeological site of the ancient city and a former capital of northern Egypt. There, Shawky lived with its inhabitants for several weeks where he witnessed first-hand the community’s activities of digging underground to search for treasures, using metaphysics, alchemy and spiritual powers to find their ancestors secrets. This truth-seeking journey took the artist-as-explorer to a location currently known as Al Araba Al Madfuna, built next to the archaeological site of a pharaonic kingdom.

Shawky produces the trilogy in a modern theatrical and cinematographic style. Children dressed in turbans, gallabiyas, and moustaches performing the roles of adults, speak the parables from Egyptian writer Mohamed Mustagab’s Dayrout al-Shareif (1983). This is combined with enacted scenes inspired by Shawky’s encounters with the villagers digging tunnels beneath their houses, hoping to find buried treasures from their ancestors. Written in ancient Arabic language, these tales also speak of contemporary concerns; a duality present in the composition of the films.