Menil: Roni Horn “When I Breathe, I Draw”, part II 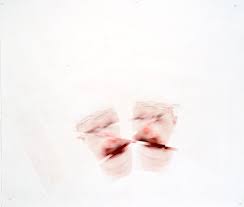 For over thirty years drawing has been fundamental to the practice of contemporary American artist Roni Horn (b. 1955), whose work revolves around the mutability of identity and the fragility of place, time, and language. Roni Horn: When I Breathe, I Draw presents a selected survey of the artist’s drawings from the early 1980s to her most recent work on paper. The presentation explores her unique technical approach of mark-marking with dense hues of pure pigment and her dynamic process of cutting and reassembling images and language. It will include a selection of large-scale and compositionally-complex works on paper, her series of saturated cadmium red drawings and an extensive group of cut photography, text and maps. This two-part exhibition will be the first museum exhibition devoted to Horn’s drawings in the United States.

The second part of the exhibition, on view June 7–September 1, 2019, brings together a series of drawings that exemplify Horn’s innovative technique of cutting as a way of drawing. Bridging her interest in the precariousness of language with dismantling the image through cutting, Th Rose Prblm (2015-2016) and The Dog’s Chorus (2016) are intricately assembled accumulations of sliced and fragmented words. Combining well-known literary texts by Gertrude Stein and William Shakespeare with colloquial expressions, the works shape novel formulations and collaborations. Like all of Horn’s drawings, they do not record or represent what the artist sees in the world. Rather, the drawn marks create new spaces that, according to the artist, “take you through the world.”

The exhibition’s title evokes the integral place of drawing within Horn’s artistic practice. It is derived from the artist’s understanding that drawing is akin to “a kind of breathing activity on a daily level.”

This exhibition is organized by Senior Curator Michelle White for the Menil Drawing Institute.

Roni Horn lives and works in New York and Reykjavik. Her work has been the subject of numerous major exhibitions including Roni Horn at the Fondation Beyeler, Basel (2016); Roni Horn a.k.a Roni Horn, organized by the Tate Modern, London, which travelled to the Whitney Museum of American Art, New York, and the Institute of Contemporary Art, Boston (2009-2010). Horn received her MFA from Yale University in 1978 and her BFA from the Rhode Island School of Design in 1975. Her work is held in major collections around the world.

Major funding for the publication is provided by Hauser & Wirth.